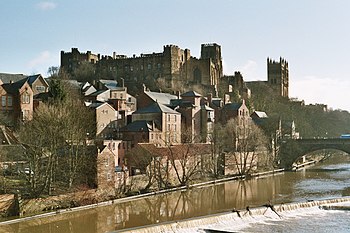 The Wear at Durham

The River Wear is a substantial river in County Durham, which rises amongst the Pennines, graces and protects its county town, Durham, and enters the North Sea at Wearmouth near Sunderland.

At 60 miles long, this is one of the longest rivers in the county and its region. In its upper reaches the Wear carves Weardale, one of the famous Durham Dales, and in the heart of the county one vast meander below a soaring cliff creates the near island on which the Cathedral City of Durham was founded, so that the Cathedral looks down from this protected position over the tumbling slope to the waters below.

Rising in the east Pennines, the headwaters of the Wear consist of several streams draining from the hills between Killhope Law and Burnhope Seat, the latter the county top. The head of the river is held to be in Wearhead, at the confluence of Burnhope Burn and Killhope Burn. The River Wear is a spate river and has been heavily influenced by drainage schemes called "gripping" with a view to improving marginal agricultural land. The river rises very quickly and has experienced much heavy flooding resulting in enhanced river bank erosion

The river flows eastwards through Weardale, one of the larger valleys of west County Durham, subsequently turning southeast, and then northeast, meandering its way through the Wear Valley to the North Sea where it flows out to the sea at Wearmouth, by Monkwearmouth. The Wear is the longest river in England with a course entirely within one county.

The Weardale Way, a long-distance public footpath, roughly follows the entire route, including the length of Killhope Burn. 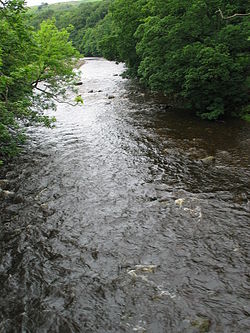 The wooded riverbanks between Stanhope and Frosterley

There are several towns, sights and tourist places along the length of the river. The market town of Stanhope is known in part for the ford across the river. From here the river is followed by the line of the Weardale Railway, which crosses the river several times, through Frosterley, Wolsingham, and Witton-le-Wear to Bishop Auckland.

On the edge of Bishop Auckland the Wear passes below Auckland Park and Auckland Castle, the official residence of the Bishop of Durham and its deer park. A mile or so downstream from here, the Wear passes Binchester Roman Fort, Vinovia, having been crossed by Dere Street, the Roman road running from Eboracum (York) to Coria (Corbridge) close to Hadrian's Wall. From Bishop Auckland the River Wear meanders in a general northeasterly direction, demonstrating many fluvial features of a mature river, including wide valley walls, fertile flood plains and ox-bow lakes. Bridges over the river become more substantial, such as those at Sunderland Bridge (near Croxdale), and Shincliffe.

At Sunderland Bridge the River Browney joins the River Wear; this confluence is one of the locations suggested for that of the Battle of Brunanburh, and by here the bloody Battle of Neville's Cross was fought. 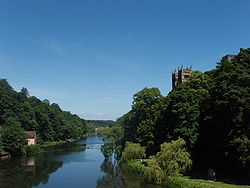 The wooded riverbanks at Durham

When it reaches the city of Durham the River Wear passes through a deep, wooded gorge, from which several springs emerge, historically used as sources of drinking water. A few coal seams are visible in the banks. Twisting sinuously in an incised meander, the river has cut deeply into the "Cathedral Sandstone" bedrock. The high ground (bluffs) enclosed by this meander is known as the Peninsula, forming a defensive enclosure, at whose heart lie Durham Castle and Durham Cathedral and which developed around the Bailey into Durham city. That area is now a UN World Heritage Site. Beneath Elvet Bridge are Brown's Boats (rowing boats for hire) and the mooring for the Prince Bishop, a pleasure cruiser.

In June each year, the Durham Regatta, which predates that at Henley, attracts rowing crews from around the region for races along the river's course through the city.[1] Seven smaller Regattas and Head Races are held throughout the rest of the year, which attract a lower number of competitors. There are 14 boathouses[2] and 20 boat clubs based on the Wear in Durham.

Two weirs impede the flow of the river at Durham, both originally created for industrial activities. The Old Fulling Mill is now an archaeological museum. The second weir, beneath Milburngate Bridge, now includes a salmon leap and fish counter, monitoring sea trout and salmon, and is on the site of a former ford. Considering that 138,000 fish have been counted migrating upriver since 1994, it may not be surprising that a family of cormorants live on this weir, and can frequently be watched stretching their wings in an attempt to cool off after feeding.

The river's banks also lend their name to a hymn tune Elvet Banks in the American Lutheran hymnbook, used (appropriately) for a hymn for baptism. 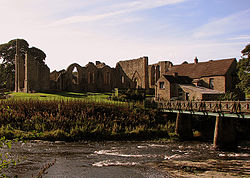 Finchale Priory between Durham and Chester-le-Street

Between the City of Durham and Chester-le-Street, 6 miles due north, the River Wear changes direction repeatedly, flowing south westwards several miles downstream having passed the mediæval site of Finchale Priory, a former chapel and later a satellite monastery depending on the abbey church of Durham Cathedral. Two miles downstream, the river is flowing south eastwards. The only road bridge over the Wear between Durham and Chester-le-Street is Cocken Bridge. As it passes Chester-le-Street, where the river is overlooked by Lumley Castle, its flood plain has been developed into The Riverside, the home pitch of Durham County Cricket Club. Passing through the Lambton Estate (still owned by the Lambton family, and briefly a lion park during the 1970s) the river becomes tidal, and navigable.

Chester-le-Street to the sea

On exiting the Lambton estate the river reaches the southern edge of the new town of Washington. At Fatfield the river passes beneath Worm Hill, around which the Lambton Worm is reputed to have curled its tail.[3]

Already the riverbanks are showing evidence of past industrialisation, with former collieries and chemical works. A little further downstream the river passes beneath the Victoria Viaduct, (formally called the Victoria Bridge). Named after the newly crowned queen, the railway viaduct opened in 1838, was the crowning achievement of the Leamside Line, then carrying what was to become the East Coast Main Line. A mile to the east is Penshaw Monument, a local iconic landmark. As the river leaves the environs of Washington, it forms the eastern boundary of Washington Wildfowl Trust.

Past the A19, the river enters the suburbs of Sunderland. The riverbanks show further evidence of past industrialisation, with former collieries, engineering works and dozens of shipyards. In their time, Wearside shipbuilders were some of the most famous and productive shipyards in the world. The artist L. S. Lowry visited Sunderland repeatedly and painted pictures of the industrial landscape around the river. Three bridges cross the Wear in Sunderland: the Queen Alexandra Bridge to the west, and the Wearmouth rail and road bridges in the city centre.

On both banks at this point there are modern developments, some belonging to the University of Sunderland St Peter's Campus and to the National Glass Centre. A riverside sculpture trail runs alongside this final section of its north bank.[4] The St Peter's Riverside Sculpture Project was created by Colin Wilbourn, with crime novelist and ex-poet Chaz Brenchley. They worked closely with community groups, residents and schools.[5]

As the river approaches the sea, the north bank (Roker) has a substantial residential development and marina. The south bank of the river is occupied by what remains of the Port of Sunderland, once thriving and now almost gone.

The River Wear flows out to the sea between Roker Pier and South Pier, and into the North Sea.