Fatfield is a village absorbed within Washington New Town in County Durham.

The housing style in Fatfield consists of centrally located attached council houses (known as white houses due to their colour) and privately owned detached houses located in quiet cul-de-sacs on the outskirts. Washington Arts Centre is also located in Fatfield.

The southern part of the village by the River Wear is popular for country walks and the three public houses and working men's club that are situated on the banks of the river. The site of the original village is just to the west of the North Biddick Club. A school was originally built on the site of the old village, but was replaced by private housing several years ago.

In 1814 the Hall Pit in Fatfield exploded with the loss of 32 lives. At 12:30 on Tuesday 28 September a fall of stone from the roof drove firedamp into contact with candles used by the miners for illumination. All the men below ground were killed, as was one of the four men in the shaft at the time. Contemporary reports refer to the survivors being affected by the afterdamp. Although the colliery was claimed (by, for instance, the colliery overman) to be safe and well worked, there had been three previous explosions of firedamp which had each killed three men.[1][2] 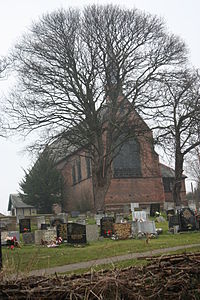 The parish church of Fatfield is St George's Church, which was built in 1879 on land given by the Earl of Durham. The church building is in what is now called Harraton, one of the Washington villages, but continues with the historic name, St George's church, Fatfield.[3] The church was massively reordered in the 1980s and inside is warm, light and contemporary, reflecting the informal and lively style of worship that takes place.

Fatfield is well known for the legend of the Lambton Worm which is said to have terrorised the village.

Fatfield had national publicity in the 1990s when the village was challenged to lose weight on the Fatfield Diet as part of a BBC television programme.