The original parish church is St Peter and St Paul. Churches in Newport Pagnell include:

The town was first mentioned in the Domesday Book of 1086 as Neuport, which is from the Old English meaning new market town. The suffix "Pagnell" came later when the manor passed into the hands of the Pagnell (Paynel) family. It was the principal town of the "Three Hundreds of Newport", a district that covers the northeastern portion of Buckinghamshire.

There were also at one time two hospitals in Newport Pagnell and six fairs were held for the townsfolk throughout the year.

Tickford Bridge, over the River Ouzel (or Lovat), was built in 1810 and is the only iron bridge in Britain that still carries main road traffic and is the oldest iron bridge in the world that is still in constant use. There is a plaque near the footbridge at the side that gives details of its history and construction. A large set of sluice gates used to control downstream flooding of the River Great Ouse is located near the bridge.

Between 1817 and 1864 the town was linked to the Grand Junction Canal at Great Linford by way of the Newport Pagnell Canal.[1]

From 1954, Tickford Street was the home of the Aston Martin factory, where all Aston Martin cars were built, until the recent opening of the new Ford Motor Company luxury division plant for Aston Martin that was built at Gaydon, Warwickshire. The town is also home to the only remaining vellum manufacturer in the United Kingdom, William Cowley, located at Parchment Works, 97 Caldecote Street. 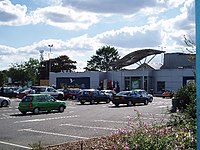