Gaydon is a village in Warwickshire, close to Leamington Spa. In the 2001, the parish had a population of 376.

Gaydon parish is crossed by only two roads of any importance — the Kineton to Southam road, which runs in a north-easterly direction, and the Warwick and Banbury road which crosses it at right angles. Gaydon has two pubs, the Gaydon Inn and the Malt Shovel. The Gaydon Inn stands close to the point of intersection of the two roads, and the main part of the village of Gaydon is disposed along a short loop south of the junction. The Gaydon Inn was famous in the 18th century for its association with violent highwaymen.

Although Gaydon has become something of a commuter village because of its proximity to the M40, which was completed in January 1991, it is undergoing a revival which is looking back to its roots, agriculture and community spirit. There are plans to revive allotments in Gaydon with the backing of the local Parish Council.[1] A local village shop opened 24 May 2010 in the centre of the village providing local produce to local residents.[2]

The section of the M40 passing Gaydon was considered as the site of a possible motorway service station, with plans first being drawn up in 1986 before being scrapped in 1990 a few months before the motorway's completion.[3]

Close by, on the site of former RAF V bomber base of RAF Gaydon, is the Jaguar Land Rover Gaydon Centre, one of the Jaguar Land Rover engineering centres (another being at the Whitley plant in Coventry) and the headquarters of Land Rover. Alongside is the Heritage Motor Centre, home to the largest collection of historic British cars in the world, charting the history of the British car industry from the turn of the 20th century to the present day. Adjacent to the site is the headquarters of Aston Martin.

The Jaguar Land Rover Gaydon Centre, which north-west of Gaydon, is one of the principal engineering centres of Jaguar Land Rover and the location of the headquarters of Land Rover. The site houses a design, research and development centre and extensive test track facilities and is used for the design and development of Jaguar and Land Rover vehicles. The site, along with the smaller Aston Martin facility adjacent, occupies the land that was once the RAF V bomber base of RAF Gaydon. The Heritage Motor Centre is also located on the same site. 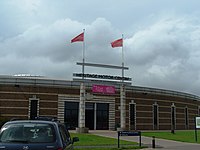 The Heritage Motor Centre in Gaydon is a motor museum and research centre, standing adjacent to the Jaguar Land Rover Gaydon Centre. It is open to the public, and houses a collection of important vehicles celebrating Britain's motoring heritage. It is affiliated to the British Motorcycle Charitable Trust.[4]

The collection, now cared for by the British Motor Industry Heritage Trust, was developed in the 1970s when a new division of the British Leyland Motor Corporation was formed to preserve and manage the company's collection of historic vehicles. During the early 1980s, closer ties were made with other British motor manufacturers. In 1983, the collection was granted charitable status, and became the British Motor Industry Heritage Trust. In the late 1980s, it became evident that larger premises would be required as the collection developed. Several new sites were considered for a purpose built museum. The present location was chosen, on the site of the former RAF Gaydon airfield in South Warwickshire, which was home to the Rover Group's design, technology and testing ground. Plans were drawn up and construction began in 1991 for the new Heritage Motor Centre. Set in 65 acres of grounds, the centre brought together all of the Trust's operations for the first time, providing exhibition and storage space for the collection of over 250 vehicles and archive of over 2 million photographs, business records, brochures and drawings. The site also includes conference facilities. 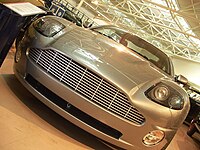 Vehicles in the collection include the first and last production models of the Land Rover Freelander and of the Rover 75, the first Mini produced and the last Rover Mini Cooper produced. It holds the very first Land Rover, and example of a Special Air Service Land Rover, as well as various famous cars and rally winners.

By the middle of the 1970s, the government had closed RAF Gaydon. In the late 1970s British Leyland purchased the site to convert it into a vehicle development facility, and proving ground and it became the headquarters of BL Technology (BLT). In 1980 BLT awarded a £2 million contract for the construction of a wind tunnel there.[5]

The ownership of the site passed, along with what was by then called the Rover Group, to British Aerospace in 1988, and subsequently in 1994 to BMW.

A disused military base near Gaydon is also home to special vaults housing the highly flammable nitrate film elements of the British Film Institute's BFI National Archive, the world's largest archive of film and television.[6]