Newark-on-Trent (generally shortened to Newark) is a market town in Nottinghamshire. It stands on the River Trent, the A1 (on the route of the old Great North Road), and the East Coast Main Line railway. It has town walls, a large though ruined castle, and a large Georgian market place.

The origins of the town are possibly Roman as it lies on an important Roman road, the Fosse Way. The town grew around Newark Castle, now ruined, and a large marketplace, now lined with historic buildings. It was a local centre for the wool and cloth trade. During the English Civil War it was besieged by Parliamentary forces, and had to be relieved by Prince Rupert in a battle known as the Relief of Newark.

The town also gives its name to the Newark Wapentake, in which it lies.

With its pleasant environment, including the surrounding villages, and its good transport links, the town is becoming a popular commuter town for the expanding city of Nottingham (around twenty miles away) and increasingly for London (1 hour and 20 minutes by rail).

Newark stands at the intersection of the Great North Road and the Fosse Way, Newark originally grew around Newark Castle, now ruined, and a large market place which is now lined with historic buildings.

The town is on the River Trent, and in the flood meadow by the town the little River Devon flows, joining the Trent here.

According to the 2001 census, Newark had a population of 25,376, but it forms a continuous built-up area with the neighbouring parish of Balderton to the south, which would expand the figure substantially.

Newark's owes its foundation and historic prosperity to its position as one of the few bridges on the River Trent in the area, its location along the Great North Road and later with the advance of rail transport as being at the junction between the East Coast Main Line and the route from Nottingham to Lincoln. The hand of man has made the Trent navigable here, and this with the foregoing factors have all enhanced its growth and development.

The wool trade brought wealth and wool was shipped form here.[1] The town become industrialised to some extent during the Victorian era, and later with an ironworks, engineering, brewing, and a sugar refinery. It was a major town standing for the Royalist cause during the Civil War, during which Newark was besieged on three occasions and finally surrendered only when ordered to do so by the King after his own surrender.[2] 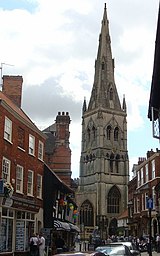 The origins of the town are possibly Roman due to its position on an important Roman road, the Fosse Way.

An Anglo-Saxon pagan cemetery, used from the early 5th to the early 7th centuries, has been found in Millgate, in Newark, close to both the Fosse Way and the River Trent in which cremated remains were buried in pottery urns.[3] In a document which purports to be a charter of 664, Newark is mentioned as having been granted to the Abbey of Peterborough by Wulfhere of Mercia.

In the reign of Edward the Confessor Newark belonged to Godgiefu (Godiva) and her husband Leofric, Earl of Mercia, who granted it to the monastery of Stow in 1055, and the monastery retained the land after the Norman Conquest, though coming under the control of the Norman Bishop Remigius de Fécamp. After Remigius died the lands passed to the Bishops of Lincoln from 1092 until the reign of Edward VI.

There were burgesses in Newark at the time of the Domesday survey, and in the reign of Edward III, there is evidence that it had long been a borough by prescription.

Newark Castle was built on the site of a Saxon fortified manor house, founded by King Edward the Elder. In 1073, Robert Bloet, bishop of Lincoln founded an earthwork motte and bailey fortress on the site. From 1123–33, Bishop Alexander the Magnificent completely rebuilt the castle, when founding a prominent stone structure of ornate construction."[4] The river bridge was built about the same time under charter from Henry I, also St Leonard's Hospital. He also gained from the king a charter to hold a five-day fair at the castle each year. He gained a charter under King Stephen to establish a mint in the town.

The town became a local centre for the wool and cloth trade, certainly by the time of Henry II a major market was established. Wednesday and Saturday markets in the town were established during the period 1156–1329 when a series of charters granted to the Bishop of Lincoln made them possible.[5] King John died of dysentery in Newark in 1216. Following his death as Henry III tried to bring order to the country the mercenary Robert de Gaugy refused to yield Newark Castle to the Bishop of Lincoln, its rightful owner, leading to the Dauphin of France (later King Louis VIII of France) laying an eight day siege on behalf of the king, ended by an agreement to pay the mercenary to leave. Around the time of Edward III's death, and excluding beggars and clergy, in "1377 – Poll tax records show adult population of 1,178 making Newark one of the biggest 25 or so towns in England".[6]

In 1457 a flood swept away the bridge over the Trent and, although there was no legal requirement for anyone to replace it, the Bishop of Lincoln, John Chaworth, financed the building of a new bridge, built of oak with stone defensive towers at either end.

When the Church of England broke from Rome in the 16th century, and the monasteries were dissolved, Henry VIII had the Vicar of Newark, Henry Lytherland executed when he refused to acknowledge the king as head of the Church. The dissolution affected Newark's political landscape heavily, and even more radical changes came in 1547 when the Bishop of Lincoln exchanged ownership of the town with the Crown. Newark was incorporated under an alderman and twelve assistants in 1549, and the charter was confirmed and extended by Queen Elizabeth I.

King Charles I, owing to the increasing commercial prosperity of the town, reincorporated it under a mayor and aldermen, and this charter, except for a temporary surrender under James II, continued to be the governing charter of the corporation until the Municipal Corporations Act 1835.

During the English Civil War, Newark was a mainstay of the royalist cause, and Charles I had raised his standard in nearby Nottingham. Newark was attacked in February 1643 by two troops of horsemen, but beat them back. The town fielded at times as many as 600 soldiers, and raided Nottingham, Grantham, Northampton, Gainsborough, and others with mixed success, but enough to cause it to rise to national notice. At the end of 1644 it was besieged by forces from Nottingham, Lincoln and Derby, the siege was only relieved in March by Prince Rupert.

Parliament commenced a new siege towards the end of January 1645 following more raiding, but this was relieved by Sir Marmaduke Langdale after about a month. Newark cavalry fought with the king's forces which were decisively defeated in the Battle of Naseby, near Leicester in June 1645.

The final siege began in November 1645, by which time the town's defences had been greatly strengthened. Two major forts had been constructed just outside the town, one, called the Queen's Sconce, to the south-west and another, the King's Sconce to the north-east, both close to the river, together with defensive walls and a water filled ditch 2¼ miles in length, around the town. In May 1646 the town was ordered to surrender by Charles I, which was still only accepted under protest by the town's garrison. After the surrender most of the defences were destroyed, including the castle which was left in essentially the state it can be seen today.

Around 1770 the Great North Road near Newark (now the A1) was raised on a long series of arches to ensure it remained clear of the regular floods it experienced. A special Act of Parliament in 1773 allowed the creation of a town hall next to the Market Place. Designed by John Carr of York and completed in 1776, Newark Town Hall is now a Grade I listed building. In 1775 the Duke of Newcastle, at the time the Lord of the Manor and a major landowner of the area, built a new brick bridge with stone facing to replace the dilapidated one next to the castle. This is still one of the major thoroughfares in the town today.

A noted advocate of reform in the late 18th century at Newark was the local-born printer and newspaper owner Daniel Holt (1766–1799). He was imprisoned for printing a leaflet advocating parliamentary reform and selling a Thomas Paine pamphlet. An account of his life by Alan Dorling is in the Nottinghamshire Historian journal, spring/summer 2000, pages 9–15 and further details in the autumn/winter edition of 2003, pages 8–12.

As parliamentary reform took hold, the then Duke of Newcastle evicted over a hundred tenants at Newark whom he believed supported directly or indirectly the Radical candidate (Wilde) rather than his own candidate (Michael Sadler) at the 1829 elections.

JS Baxter, who was a schoolboy in Newark from 1830 to 1840, contributed to The hungry forties: life under the bread tax (London, 1904), a book about the Corn Laws: "Chartists and rioters came from Nottingham into Newark, parading the streets with penny loaves dripped in blood carried on pikes, crying 'Bread or blood.'"

The clothing, bearings, pumps, agricultural machinery, pine furniture making and sugar refining were the main industries in Newark in the last 100 years or so. British Sugar still has one of its sugar beet processing factories to the north of the town near the A616 (Great North Road). There have however been several factory closures, especially since the 1950s.

With its pleasant environment, including the surrounding villages, and its good transport links, the town is becoming a popular commuter town for the expanding city of Nottingham, twenty miles away and even increasingly for London (1 hour and 20 minutes by rail).

Newark is also home of Newark Rugby Union Football Club, which has produced past players who have achieved fame. 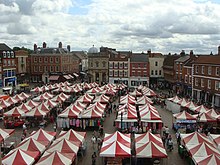 Market held in the Market Place

Newark Castle was built alongside the Trent by Alexander of Lincoln, the Bishop of Lincoln in 1123, who established it as a mint.[9]

Of the original Norman stronghold the most important remains are the gate-house, a crypt and the tower at the south-west angle. King John died at this castle on the night of 18 October 1216.[10][11] In the reign of Edward III it was used as a state prison.

During the English Civil War, the castle was garrisoned for King Charles I, and with great courage it endured three sieges. The King at last ordered the castle to surrender in 1646, when the King himself gave himself up to the Parliamentary forces. The dismantling of the castle was begun almost immediately.

The Newark Torc, a major silver and gold Iron Age torc, the first in Nottinghamshire and very similar to those found at Snettisham, was found in 2005 in what is now a field on the outskirts of Newark,[12] and in 2008 was acquired by the town's museum.[13]

Newark-on-Trent has been a transport hub for millennia.

Today the town has two railway stations linked to the national network. The East Coast Main Line runs through Newark North Gate railway station providing links to London, Leeds, Newcastle upon Tyne and Edinburgh. The Newark Castle railway station lies on the Leicester – Nottingham – Lincoln line providing cross-country regional links. These two lines cross on the level, which is one of a handful of flat crossings in Britain.[14]