From Wikishire
Jump to: navigation, search
For the village of the same name in Cheshire, see Balderton, Cheshire

Balderton is a village and parish in the Newark Wapentake of Nottinghamshire, which had a population of 9,757 at the 2011 census.[1]

Balderton is one of the largest villages in Nottinghamshire,[2] although it may be more properly considered a suburb of Newark on Trent. Balderton is split into Old Balderton, the southern part of the village, and New Balderton.

The busy A1 trunk road once ran through the village – recent improvements have created a bypass for the A1, improving the environment. The old A1 near the site of the hospital/hall was called the Ramper. The east coast main railway line between London and Edinburgh also skirts the village, the nearest station is Newark. Balderton was also once on the Great North Road.

The soil is mostly alluvial clays. Large deposits of gravel and sand were excavated in New Balderton – the resulting pits have now been turned into a lakeside park. Gypsum was once mined nearby. The surrounding area is mostly agricultural, mixed arable and livestock.

The name Balderton has obscure roots but may have been derived from Balder or Baldur – the Norse god of innocence, beauty, joy, purity, and peace and Odin's second son eventually killed by his blind brother in an accident involving Loki, the god of mischief and fire. The village itself is probably of Anglo-Saxon origin and is mentioned in the Domesday Book. The ton suffix suggests a Late Anglo-Saxon origin. The Saxon countess Godiva, the wife of Earl Leofric, had property in the Manor of Newark nearby.

In the Domesday Book (1086) the place is called Baldretune and is described as a berewick (a dependent hamlet) of Newark. In the Pope Nicholas IV taxation of 1291 it is spelt Baldirton.

Balderton's Lords, the Busseys, lived in the area in William the Conqueror's era and held it until the reign of Elizabeth I. It subsequently descended to the Meers and Lascels. In the 1840s, when its population was a little over 1,000, large parts of the village were owned principally by the Duke of Newcastle, who was lord of the manor.

Two petitions of the fourteenth century show disputes with the nearby village of Claypole. In 1305 the bishop of Lincoln and the Busseys were hindering passage along the road to Newark market (National Archives S8/161/8038) and in 1324 the people of Claypole petitioned about Balderton people attacking jurors in relation to the Oldebrigg between Nottinghamshire and Lincolnshire (National Archives S8/39/1930). The will of John de Boston, a mercer of Newark, in 1443 left twenty shillings for the maintenance of the bridge between Balderton and Bennington; the bridge was called "fennebrige" (Brown (1907) 1.172).

During the final siege of Newark in the Civil War Colonel Rossiter, a parliamentary commander, was camped at Balderton.

A Balderton enclosure act was passed in 1766.

London Road was built in 1767 as a turnpike (bypass) for the Great North Road (designated the A1 in 1923) which ran through Balderton and to the north of England. One of the former coachouses built to serve the turnpike is now a public house.

A windmill at Balderton was recorded as having been removed c. 1845. It was a postmill on a two-storey roundhouse, with two spring and two common sails. A windmill was recorded on the Old Series Ordnance Survey map on a site close to Spring Lane.

In 1901 Simpson and Co opened their pump manufacturing works at Balderton; it was subsequently Worthington Simpson in 1917 and from 2001 Flowserve Pumps Ltd. Their products are used in the chemical, water, and pharmaceutical industries.

Pre-Roman and Roman sites have been noted in English Heritage's Pastscape records for Balderton, along with two Civil War sites. 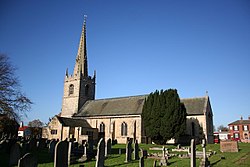 The Parish Church of St Giles' (diocese of Southwell) was originally built in the 12th century and enlarged considerably in the 13th and 14th centuries. Two Romanesque-style porch doorways, dating from about 1140, face north and south. The more imposing north entrance is topped by a niche containing a figure, possibly St Giles, although this was probably added as late as the 19th century. The north and south arcades are of 13th and 14th century date respectively and the font is octagonal and early 14th century. The rood screen dates from about 1475 and the numerous bench ends are of an uncommon symmetrical design. The church has a substantial spire at the west end of the building containing a peal of eight bells. The lower part of the tower is 13th century but the upper parts must be later, either late 14th or early 15th century.[3]

At the beginning of the 20th century education in Balderton was organised in a senior school in Main Street and a primary school on London Road, the latter opening in 1903.

A few children from the village went from the primary school to the grammar schools in Newark, the numbers increasing after the 1944 education act. Some children at thirteen went to the technical college in Newark.

A second primary school, Chuter Ede, opened in 1964 in Main Street, and in its present buildings in Wolfit Avenue in 1967. A second site opened in 2012 in Fernwood, a new housing estate.

A private preparatory school, Highfields, is on the border with Newark.

Secondary education for those aged eleven to eighteen is at The Newark Academy. 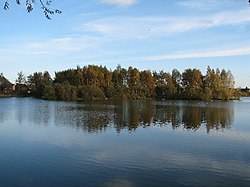 Balderton Lake is owned by the Balderton Parish Council, who maintain the walkway around the lake, as well as the wooded area and grasslands. There is a viewing area with access for disabled people.[2] A number of trees around the lake were planted early in the 1990s as part of a project undertaken by John Hunt Infant School. A local fishing club rent fishing rights from the council, and are responsible for taking care of the water, while the charity Sustrans have resurfaced the old Newark-Bottesford railway line bordering the lake, resulting in several miles of walking and cycle track. It is now surrounded by a large number of houses.

Until the opening of the Newark Sports and Fitness Centre in May 2016, Balderton was the location of a leisure centre serving the local community, offering two swimming pools, gym facilities, squash courts and other sporting amenities.

A large private house on the southern outskirts of the village built 1840 for Thomas Spragging Godfrey. Godfrey became sheriff of Nottinghamshire in 1853 (Times 9 February 1853, page 3) and died at Balderton Hall on 7 September 1877. The hall was advertised for sale in the Times in November 1880: house, stables, cottages for gardener and groom, and 135.0 acres (0.5 km²), the remaining 425.0 acres (1.7 km²) to be sold separately.

It was bought in 1930 by Nottinghamshire county council for conversion to a mental hospital but work on this stopped during World War II. The hospital was opened for patients in 1957 and closed in 1993. There is now housing on the former hospital site and nearby is the Fernwood business park. 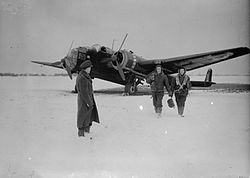 Balderton airfield opened in June 1941 with a grass surface over stiff clay. It was used by the Royal Air Force (RAF), Royal Canadian Air Force (RCAF) and United States Army Air Forces (USAAF). During World War II it was used primarily as a troop carrier transport airfield and after for munitions storage before it finally closed. RAF Balderton airfield was also used by Sir Frank Whittle and his flight trials unit during development of the jet engine in 1943-1944. Whittle lived and worked on his engine designs at Balderton Old Hall on Main Street.