Difference between revisions of "East Grinstead"

East Grinstead is a town in northern Sussex, very close to the borders of Surrey and Kent. Its northern suburb of Baldwin's Hill lies across the border in Surrey. It lies 21 miles north-north-east of Brighton, and 38 miles east-north-east of the county town of Chichester. The civil parish covers 6,035 acres and had a population of 23,942 at the 2001 census.

The town stands on the Greenwich Meridian. It is located in the Weald, and the Ashdown Forest lies to the south of the town. The town itself is not overall famed for its beauty, but it has several historic buildings in contrast to its suburbs.

Nearby towns include Crawley to the west, Tunbridge Wells to the east and Redhill and Reigate to the northwest. The town is contiguous with the village of Felbridge to the north-west.

The High Street contains one of the longest continuous runs of 14th-century timber-framed buildings in Britain.

Other notable buildings in the town include Sackville College, the sandstone almshouse built in 1609 (where the Christmas carol "Good King Wenceslas" was written by John Mason Neale). The college has sweeping views towards Ashdown Forest.

St Swithun's Church adjacent stands on the highest ground in the town and was rebuilt in the eighteenth century (the tower dating from 1789) to a perpendicular design by James Wyatt; its imposing building dominates the surrounding countryside for many miles around. In the churchyard are commemorated the East Grinstead Martyrs; and in the south-east corner is the grave of John Mason Neale.

The East Court mansion, built in 1769, is home of the Town Council.[1] The Greenwich Meridian runs through the grounds. The mansion stands in a parkland setting.

On the outskirts of the town is Standen, a country house belonging to the National Trust, containing one of the best collections of arts and crafts movement furnishings and fabrics. Off the A264 towards Tunbridge Wells, there is a 1792 historic house called Hammerwood Park (the first work of the future architect of the United States Capitol) which is open to the public twice a week in summer.

The town is well located to visit Chartwell the country home of Sir Winston Churchill, Hever Castle home of Henry VIII's second wife Anne Boleyn, and Penshurst Place home of the Sidney family. Kidbrooke Park (today Michael Hall School), a home of the Hambro family, was restored by the noted Sussex architect and antiquarian, Walter Godfrey, as was Plawhatch Hall.

Local attractions include Ashdown Forest and the Bluebell Railway, a preserved heritage line with steam locomotives. 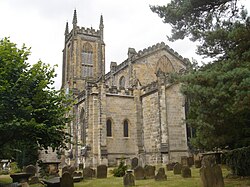 A broad range of Christian denominations have churches in the town. Protestant Nonconformism has featured especially prominently for the last two centuries, in common with other parts of northern Sussex.[2]

St Swithun's was the original parish church. It was founded in the 11th century, and the architect James Wyatt rebuilt it in local stone in 1789 after it became derelict and collapsed.[3][4] Near the entrance to the church, three stones mark the supposed ashes of Anne Tree, Thomas Dunngate and John Forman who were burned as martyrs on 18 July 1556 because they would not renounce the Protestant faith. John Foxe wrote about them in his 1,800-page Foxe's Book of Martyrs.[5]

East Grinstead has an unusually diverse range of religious and spiritual organisations for a town of its size.[8][9][7]

In 1994, a documentary entitled Why East Grinstead? was produced for Channel 4's Witness strand of documentaries. It sought to examine and explain the convergence of such a wide variety of religious organisations in the East Grinstead area. The documentary, directed by Ian Sellar, reached no definite conclusion: explanations proposed to him ranged from ley lines to the more prosaic idea that religious leaders had settled there because they liked the views.[7][13]

In 1863, the then cottage hospital, Queen Victoria Hospital, was built on its current site in the 1930s. During the Second World War the hospital was developed as a specialist burns unit by Sir Archibald McIndoe. It became world famous for pioneering treatment of RAF and allied aircrew who were badly burned or crushed and required reconstructive plastic surgery. Most famously, it was where the Guinea Pig Club was formed in 1941, as a club which then became a support network for the aircrew and their family members. The club still provides assistance for Guinea Pigs, and meets regularly in East Grinstead. The Duke of Edinburgh is the current President of the club. Queen Victoria Hospital remains at the forefront of specialist care today, and is renowned for its burns treatment facilities and expertise throughout England.[14]

During the Second World War, the town became a secondary target for German bombers which failed to make their primary target elsewhere. On the afternoon of Friday the 9th of July 1943, a Luftwaffe bomber became separated from its squadron, followed the main railway line and circled the town twice, then jettisoned seven bombs. Two bombs, one with a delayed-action fuse, fell on the Whitehall Theatre, a cinema on the London Road, where 184 people at the matinée show were watching a Hopalong Cassidy film before the main feature. A total of 108 people were killed in the raid, including children in the cinema, many of whom were evacuees; and some twenty Canadian servicemen stationed locally, who were either in the cinema when it was hit, or arrived minutes later to help with rescuing survivors. This was the largest loss of life of any single air raid in Sussex.

The town was devastated almost everyone in the town knew someone who lost or had a child injured. As such the townspeople became very supportive of the patients at the Queen Victoria Hospital. Even though horribly disfigured often missing limbs, and in the worse cases faces made up of burn tissue the townspeople would go out of their way to make the men feel normal even though they were horribly disfigured. Families invited the men to dinner and girls asked them to go on dates. Patients of the burn units remember the and cherish the charity received by the townspeople of East Grinstead.

In addition to the nearby Ashdown Forest, East Grinstead is served by the Forest Way and Worth Way linear Country Parks which follow the disused railway line from Three Bridges all the way through to Groombridge and which are part of the Sustrans national cycle network. To the south of the town lies the Weir Wood Reservoir which offers sailing[17] and a nature reserve which attracts an interesting assortment of birdlife. It is designated a Site of Special Scientific Interest.

A part of the Lewes line is being re-constructed by the Bluebell Railway,[18] a nearby preserved standard gauge railway. The extension work is being carried out in stages, and work on what will be the northernmost section of the line (which connects to the main national network at East Grinstead) is nearing completion. This includes the construction of a new Bluebell Railway station at East Grinstead, just to the south of the existing main-line station. However this does not mark the end of the project as a significant gap in the line remains in the form of the land-filled Imberhorne Cutting, which the Bluebell Railway aim to excavate. Fundraising and engineering work on this project are ongoing.[19]

The East Grinstead Society[20] was founded in 1968 as an independent body both to protect the historically important buildings of East Grinstead and its environs and to improve the amenities for future generations.

East Grinstead is well served by local sports and social clubs. Municipal facilities include the King George's Field, named as a memorial to King George V. The King's Centre leisure centre, currently owned and operated by the local Council, is on this land, which was left to the town by a local benefactor.

The local weekly newspaper is the East Grinstead Courier & Observer, published each Thursday.