Caerleon is a suburban village on the River Usk in Monmouthshire. It forms the northern outskirts of the city of Newport.

Caerleon is of great archaeological importance; it is most famous as the site a Roman legionary fortress known as Isca Augusta and an Iron Age hill fort.

The Wales National Roman Legion Museum and Roman Baths Museum are in Caerleon close to the remains of Isca Augusta. Caerleon also has strong literary associations. Geoffrey of Monmouth portrayed Caerleon one of the most important cities in Britain in his Historia Regum Britanniæ, and Alfred Lord Tennyson wrote the Idylls of the King while staying in Caerleon. 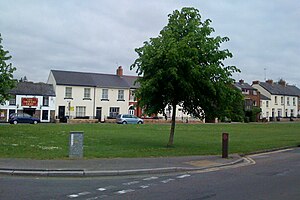 Caerleon is centred around a small common, Goldcroft Common, the only remaining of the seven commons of Caerleon. Most of the small businesses of Caerleon are near the common as is the Tourist Information Office and Town Hall which has a War Memorial garden. The intersection of High Street and Cross Street is known as The Square.

Buildings of note include:

- and various hotels and the building of the Caerleon Campus of the University of Wales, Newport

The historic remains of the Roman Legionary Fortress Isca Augusta are popular with tourists and school parties and there is a marked heritage trail in the village.

The Millennium Wildlife Garden is a small nature garden on the banks of the River Usk. The hilltop vantage point at Christchurch provides panoramic views of the Vale of Usk and Bristol Channel.

The centre of Caerleon sits in the Vale of Usk. In the north-west part of the village, across the railway bridges, the land rises sharply up to Lodge Wood and its hill fort. The River Llwyd here flows southwards to the River Usk along the village's eastern side. Across the River Usk from Caerleon, to the south-east and east, St Julian's Park, the village of Christchurch and the upland region around Christchurch Hill. 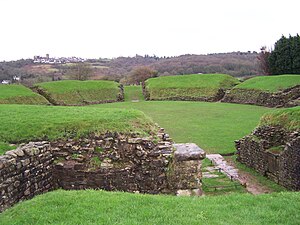 Remains of the Roman amphitheatre 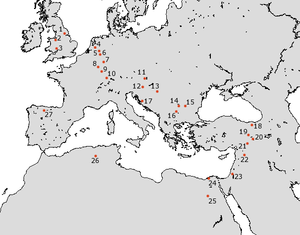 A map of all Roman fortresses in Europe with Caerleon noted

Caerleon's legionary fortress or castra was the headquarters for Legio II Augusta from about 75 to 300 AD) and before that it had an Iron Age hill fort. The name Caerleon is derived from the Welsh for "fortress of the legion"; the Romans themselves called it Isca, a native British name referring apparently to the River Usk.

Substantial excavated Roman remains can be seen at the site, including the military amphitheatre, thermae (baths) and barracks occupied by the Legion. According to Gildas (followed by Bede), Roman Caerleon was the site of two early Christian martyrdoms; those of Julius and Aaron. Recent finds suggest Roman occupation of some kind as late as 380 AD.[1] Roman remains have also been discovered at The Mynde, itself a distinctive historical site.[2]

During the Early Middle Ages Caerleon or nearby Isca Silurum (now Caerwent) was the administrative centre of the Kingdom of Gwent. The parish church of St Cadoc was founded on the site of the legionary headquarters building probably at some time in the 6th century.

A Norman-style motte and bailey castle was built outside the eastern corner of the old Roman fort, probably by the Welsh Lord of Caerleon, Caradog ap Gruffydd. Battles raged between the Welsh and Normans and in 1171 Iorwerth ab Owain and his two sons destroyed the town of Caerleon and burned the Castle.

Caerleon was an important market and port and presumably became a borough by 1171, although no independent charters exist. Both castle and borough were seized by William Marshal in 1217 and Caerleon castle was rebuilt in stone. The remains of many of the old Roman buildings stood to some height until this time and were probably demolished for their building materials. 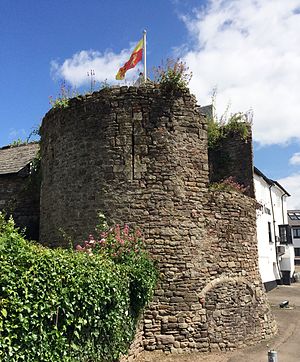 Round Tower, at The Hanbury Arms, Caerleon, 2010

During the rebellion of Owain Glyndŵr in 1402, Rhys Gethin, Glyndŵr's general, took Caerleon Castle together with those of Newport, Cardiff, Llandaff, Abergavenny, Caerphilly and Usk by force.[3] This was probably the last time Caerleon castle was ruined, though the walls were still standing in 1537 and the castle ruins only finally collapsed in 1739 - their most obvious remnant is the Round Tower at the Hanbury Arms public house.

Across the Llwyd River from Caerleon, in the region of Penrhos Farm, are two forts of the English Civil War. In 1648 Oliver Cromwell's troops camped overnight on Christchurch Hill, overlooking Newport, before their attack on Newport Castle the next day. 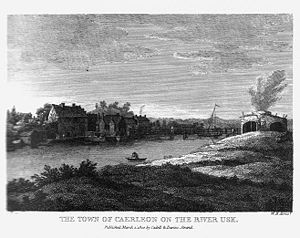 Caerleon in 1800, from the south and showing the bridge

The old wooden Caerleon Bridge was destroyed in a storm in 1779 and the present stone version was erected in the early 19th century. Until the Victorian development of the downstream docks at Newport Docks, Caerleon acted as the major port on the River Usk. The wharf was located on the right bank, to the west of today's river bridge which marked the limit of navigability for masted ships. A tinplate works was established on the outskirts of the town around this time and Caerleon expanded to become almost joined to Newport.

The name of the Drovers' Arms on Goldcroft Common bears witness to the ancient drovers' road on the old road from Malpas. It is thought that the common itself was once the site of a cattle market.[4]

Geoffrey of Monmouth wrote his Historia Regum Britanniæ in the twelfth century, and it was remarkably well received in such credulous times, despite warnings from contemporaries; though even Gerald of Wales, who condemned the book utterly, used it uncritically as a source on occasion! If not a history, it is the foundation of many a romantic legend.

Geoffrey's History makes Caerleon one of the most important cities in Britain. He gives it a long, glorious history from its foundation by King Belinus to becoming the location of a metropolitan see, an Archbishopric, superior to Canterbury and York, under Saint Dubricius. He was followed by St David, who moved the archbishopric to St David's Cathedral. This culminates in Geoffrey's making the town a court of King Arthur.

There was no Camelot mentioned in the early Arthurian account of Geoffrey of Monmouth and his translators Wace and Layamon: "Camelot" originates with the French writer of courtly romance Chrétien de Troyes. These earlier authors say that Arthur's capital was Caerleon (which Chretien also mentions), while even the later recaster of Arthurian material in English, Sir Thomas Malory, has Arthur re-crowned at "Carlion". The still-visible Roman amphitheatre at Caerleon has been associated with Arthur's 'Round-Table' element of the tales[5] and has been suggested as a possible source for the legend.[6] Geoffrey of Monmouth writes of Caerleon in the mid 12th century:

"For it was located in a delightful spot in Glamorgan, on the River Usk, not far from the Severn Sea. Abounding in wealth more than other cities, it was suited for such a ceremony. For the noble river I have named flows along it on one side, upon which the kings and princes who would be coming from overseas could be carried by ship. But on the other side, protected by meadow and woods, it was remarkable for royal palaces, so that it imitated Rome in the golden roofs of its buildings... Famous for so many pleasant features, Caerleon was made ready for the announced feast. (Historia Regum Britanniae, "History of the Kings of Britain")

This is only a short part of a description that emphasises the power and wealth of Arthur's court. The huge scale of the ruins along with Caerleon's importance as an urban centre in early mediæval Gwent would have inspired stories which Geoffrey expanded.

Caerleon also has later Arthurian literary associations, as the birthplace of the writer Arthur Machen who often used it as a location in his work. The Hanbury Arms was visited by the poet Tennyson who lodged at the inn while he wrote his Morte d'Arthur (later incorporated into his Idylls of the King).[7] Today Caerleon has a modern statue of a knight, "The Hanbury Knight", in reflective inox by Belgian sculptor Thierry Lauwers.[8]

In Michael Morpurgo's novel Arthur, High King of Britain, Caerleon is the castle where Arthur unknowingly commits incest with his half-sister Margause, resulting in the conception of his son Mordred who will later bring about his downfall. 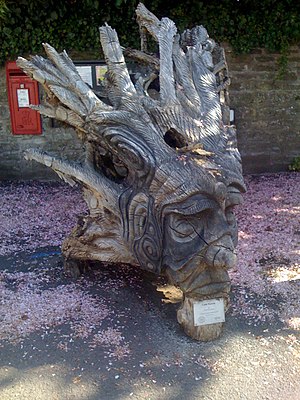 Caerleon has hosted an arts festival]] in July each year since 2002, which includes tree sculptors from around the world.[9] Many of the sizeable sculptures are retained around Caerleon as a sculpture park and local landmarks. The arts festival coincides with the Roman military re-enactment in the amphitheatre which demonstrates Roman military armour, infantry tactics, cavalry tactics, equipment and siege engines such as ballistae.

Live music events and visual arts are staged at venues in the town including plays at the open-air Roman Amphitheatre in summer.

An informative and wide ranging history of the town was published in 1970 by local amateur historian Primrose Hockey MBE,[10] who was a founder member of Caerleon Local History Society and member of Gwent Local History Council. An archive of her local history collection is kept by the Gwent Record Office.[11]