Malpas is a parish that forms a suburb of the city of Newport, Monmouthshire. The name is from the French language Mal (bad/poor) and Pas (passage/way).

Towards the north of the parish lies Malpas Court, a Grade II listed building, originally designed by Thomas Wyatt of London and built in the 1830s for the Prothero family. Thomas Prothero was resident here during his year as High Sheriff of Monmouthshire in 1846.

There are two large housing estates either side of the main Malpas Road: To the west is Hollybush and the council estates of Westfield and Malpas Court, although many of the houses are now in private ownership. To the east are the privately owned estates Woodlands, Malpas Park, Pilton Vale and Claremont. The roads in Malpas Court take their names from famous inventors and scientists, while those in Malpas Park are named after trees. The roads in Woodlands are named after World War II generals, e.g. Allenbrooke Avenue, Horrocks Close, Montgomery Road, Robertson Way, Wavell Drive, &c. 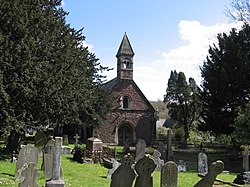 There are three Christian churches in Malpas, St Mary's (Anglican), Trinity (Presbyterian), and St Anne's (Roman Catholic). The fourth Malpas Church, Christchurch,[6] which is just off the Old Malpas Road is in the Shaftesbury Ward. There are no formal places of worship for other religions or faiths.

Malpas is also home to the private St Joseph's Hospital and an in-patient hospice service, St Anne's Hospice,[7] both originally run by the Sisters of St Joseph of Annecy. Since 2013 the hospice has been run by St David’s Foundation Hospice Care,[8] whilst the hospital was taken over by a consortium of businessmen and doctors in July 2014.[9]

A fire station is located in Malpas.

There is an Army Cadet detachment near Oliphant Circle. It is badged to the local TA regiment the Royal Monmouthshire Royal Engineers.

A cycle and pedestrian walkway alongside the River Usk links Malpas to Caerleon and the city centre at Crindau.[10]