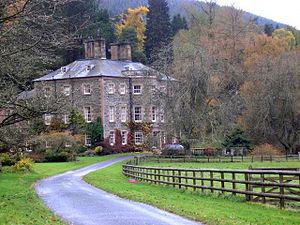 Yair, also known as The Yair, is an estate in Selkirkshire. It stands by the River Tweed, 2½ miles northwest of Selkirk.

The name of the estate comes from the old Scots word for a fish trap.

In 1156, King Malcolm IV allowed the monks of Kelso to build a dam on the River Tweed, creating a pool for fishing.[3] This is the origin of the name of the estate.

Yair House was built by Alexander Pringle of Whytbank (1747–1827) in 1788. It is a Georgian house of three storeys, with a large bay to the front.[1] Pringle made his fortune in India, and re-purchased the family estates on his return. These estates, which included Whytbank Tower on the north side of the river, had been Pringle property since the 16th century, but were sold in the early 18th century to pay debts.[4] The designer of the new house was William Elliot,[4] a Kelso-based architect who designed The Haining in Selkirk, for another Pringle, in 1794.[5]

Yair Bridge lies 650 yards downstream of the house. It was constructed in 1764, and designed by the Edinburgh architect William Mylne (1734–1790). The three-arch stone bridge now carries the A707 across the Tweed.[2][6]

Yair Hill Forest is one of many forests in the Borders managed by Forestry Commission Scotland. It is located to the south and west of the house on Craig Hill (1,253 feet) and on Three Brethren (1,588 feet).

The Three Brethren are named after three stone mounds built in the 16th century by the lairds of Yair, Philiphaugh and Selkirk, to mark the boundaries of their lands.[7]

Access to the forest is at Lindinney car park on the A707, close to Yair Bridge. The Yair Grazings car park, at the north-west edge of the forest, allows access to Yair Wood, and nearby Glenkinnon car park is the access point for a biodiversity trail.[3] Part of the forest is Lindinny Community Woodland, which is being restored from coniferous to native woodland by FCS and the Borders Forest Trust.[8]

The Southern Upland Way passes through the estate, descending from Three Brethren and crossing Yair Bridge. The Sir Walter Scott Way follows the same route. Below Yair is the Fairnilee slalom site on the River Tweed, used for canoe slalom.

Yair House is not open to the public, theough the gardens are occasionally opened for charity as part of Scotland's Gardens Scheme.