Wootton is a village and ancient parish in Northamptonshire that forms a suburb of the county town, Northampton. It lies about three miles south of the town centre.

Wootton is separated from Hardingstone by the Newport Pagnell Road the B526, formerly part of the A50. Part of Wootton is alongside the A45 dual carriageway from the M1 to Wellingborough which is seen and heard from that part of the area.

In the Domesday Book, Wootton is described as "Wetone". It later became Weton, Wutton and then Witton. "Wootton" appeared in the 14th century. The names probably have the Saxon origin of "Wudutun" and mean settlement or farmstead in, or by, a wood, which may have been Salcey Forest. 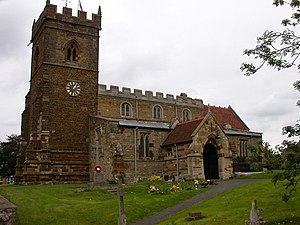 The Church Of St. George The Martyr, Wootton

The thirteenth-century Parish Church of St George, The Martyr, stands in the High Street in a conservation area and is a Grade-I listed building. It was restored in 1865.[2] It was again restored and re-dedicated in 1991 after a £93,000 restoration programme had been successfully completed.

The Rectory, west of the church is dated 1630.[2] A memorial in the south wall is to the wife of John Harris – the Lord of the Manor in the eighteenth century.

Little of Wootton dates from earlier than Stuart times. Most of the stone houses are late 17th or early 18th century. Many of these houses were originally thatched, as can be seen from the steep pitch of the roof.

Many brick cottages are at least as old with those in Church Hill, at least 1770's, as they are mentioned in the Enclosure Act of 1779. Wootton had its own brick works along Berry Lane. A nearby field was known as Clay Pit field as late as 1932, but even in 1899, it was known as the "Old" Brick Works and used for many years as an ash tip. The Department of the Environment listed Carey's Cottage in Berry Lane as 16th century.

The Northamptonshire Regiment and later Royal Pioneer Corps were stationed at the former Quebec Barracks, later renamed Simpson Barracks[3] on a large site adjacent to the Newport Pagnell Road which include the old Hardingstone workhouse building[1] which dates from 1839.[2] 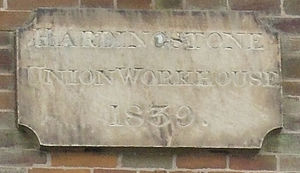 The Barracks closed on 1 April 1993 and the site is now used for a housing estate, including the old workhouse, many road names reflecting its military origin. During the war the corps had an ammunition dump hidden in woods at Yardley Chase, where signs still remain.

The village backs on to a several modern housing estates including Wootton Fields and the area previously occupied by an army barracks. The development and loss of village character occurred during the 1980s and 1990s as the town expanded south towards the M1 motorway near junction 15.

Further urban expansion of Northampton was being planned in October 2008 with another 13,500 houses and additional infrastructure in the rural areas around Grange Park, Quinton and Preston Deanery.[4]

There is a community centre, a recreation ground with multi-use games area, a Working men's club; opticians and a medical centre.

Wootton has two pub/restaurants – "The Yeoman of Old England" in the centre of what was the old village. The second, "The Queen Eleanor" together with a hotel are both on Newport Pagnell road near the Queen Eleanor junction of Mereway and the A45. There is a shop, butcher, chemist and a large Garden Centre in Newport Pagnell Road.