Woolhampton is a village in Berkshire, on the London to Bath A4 road between Reading (8 miles east) and Newbury (6 miles west). The village lies on the northern edge of the flat flood plain of the River Kennet, with the Berkshire Downs rising above the village to the north.

Besides the A4 road, both the Reading to Taunton railway line and the Kennet and Avon Canal also pass through the village.

The A4 road forms the main street of the village. An unclassified road runs to the south, towards the village of Brimpton. This crosses the railway line by the station on a level crossing, followed shortly afterwards by a swing bridge across the river and canal (which share a common channel at this point). Woolhampton Lock lies just to the west. Two other unclassified roads leave the village to the north, climbing into the Berkshire Downs.

Because of its location on the Bath road, Woolhampton was well known for its coaching inns. Two of these survive on the main road, the Falmouth Arms and the Angel. A third public house, the Rowbarge, is, as its name suggests, situated alongside the Kennet and Avon Canal next to the swing bridge.[2] 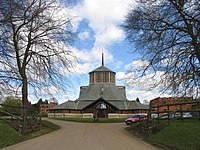 The Woolhampton Reed Bed, a Site of Special Scientific Interest, lies alongside the River Kennet within the parish and to the south east of the village. The dense reed bed, with smaller areas of tall fen vegetation and carr woodland, is notable for its nesting bird populations and for the diversity of insects it supports.[4]