From Wikishire
(Redirected from Wirral Peninsula)
Jump to: navigation, search 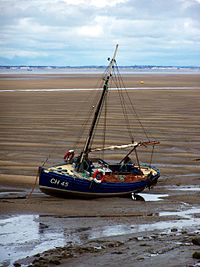 The roughly rectangular peninsula is about 10 miles long and seven miles wide. The Wirral's boundary with the rest of Cheshire was said to be "Two arrow falls from Chester City Walls", as mentioned in the Domesday Book. On this larger definition, even places such as Ledsham, Puddington and Saughall are part of the Wirral, and indeed they do lie within the Wirral Hundred. 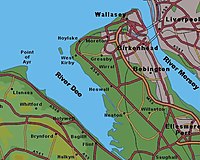 Map of the Wirral

Although it has been stated that "it is difficult to find any work in which there is a written description of the exact area defining the Wirral Peninsula"[1], historian Stephen Roberts adopted a definition of convenience as "the peninsula which is bounded by the Dee and Mersey estuaries, Irish Sea and... the route of the Shropshire Union Canal between Ellesmere Port and Chester". The Hundred extends slightly further east, to the River Gowy.[2]

The Shropshire Union Canal joins the River Mersey at Ellesmere Port and the River Dee at Chester. The canal is a freshwater waterway and cut with locks, without which the peninsula might technically have become an island.

Two approximately parallel Triassic sandstone ridges run down the length of the peninsula. The western ridge is made up of Grange and Caldy Hills at 256 feet in height, then Thurstaston Hill (298 feet), Poll Hill in Heswall (350 feet, the highest point on the Wirral) and Burton (222 feet). The less continuous eastern ridge consists of Bidston Hill (231 feet), Prenton (259 feet) and Storeton Hill (229 feet)[3]. The Fender Valley between these ridges was carved out by a large glacier.

The name “Wirral occurs” in the Anglo-Saxon Chronicle as Wirheal, literally "myrtle-corner"; it is supposed that the land was once overgrown with bog myrtle, and though the plant is no longer found on the Wirral it plentiful around Formby in Lancashire, which has a similar habitat the that which would once have prevailed on the Wirral.[4]. The Hundred of The Wirral was named around the 8th century, although by the time of the Domesday Book and for some time afterwards the name of the hundred was Wilaveston, later Willaston.[3]

The twentieth century on the Wirral

The dockland areas of Wallasey and Birkenhead continued to develop and prosper in the first half of the century, specialising in trade with Africa and the Far East. A host of other port-related industries then came into existence, such as flour milling, tanning, edible oil refining and the manufacture of paint and rubber-based products. In 1922 a new oil dock was built at Stanlow near Ellesmere Port, and in 1934 oil refining began there. A large chemical and oil refining complex still dominates the area.

In 1929, the 3rd World Scout Jamboree was held at Arrowe Park and this celebrated the 21st Anniversary of the publication of Scouting for Boys. Thirty-five countries were represented by 30,000 Scouts, plus another 10,000 British Scouts who took the opportunity to camp in the vicinity.

The rail tunnel under the Mersey was supplemented by a vehicle tunnel in 1934, the Queensway Tunnel. A third tunnel opened in 1971, the Kingsway Tunnel, connecting with the M53 motorway which now runs up the centre of the peninsula. These new roads contributed to the massive growth of commuting by car between Liverpool and the Wirral, and the development of new suburban estates around such villages as Moreton, Upton, Greasby, Pensby, and Bromborough.

In 1940-41, as part of The Blitz, parts of the Wirral, especially around the docks, suffered extensive bomb damage. There were 464 people killed in Birkenhead and 355 in Wallasey, and 80% of all houses in Birkenhead were either destroyed or badly damaged.[2] During the Second World War the Wirral held two RAF sites, RAF West Kirby (which was a camp, not an airfield) and RAF Hooton Park and a number of anti-aircraft sites in order to protect the docks of Birkenhead and Liverpool.

After the Second World War, Birkenhead began an economic decline, as elsewhere in the area. However, there continued to be industrial development along the Mersey between Birkenhead and Ellesmere Port, including the large Vauxhall Motors car factory on the site of RAF Hooton Park.[2]

Many towns and villages are spread across the narrow Wirral peninsula, including: 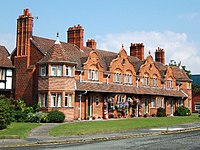 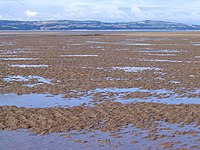 From Lime Wharf over the River Dee

Despite containing urban and industrial areas, the Wirral still has picturesque villages, sandy beaches, large areas of land owned by the National Trust as well as views across the two estuaries and out into the Irish Sea.[5] Among the areas of open land are Bidston Hill, Caldy Hill, Eastham Country Park, including the Victorian Pleasure Gardens, Hilbre Island, North Wirral Coastal Park, Thurstaston Common and the Wirral Way. Ness Botanical Gardens are part of the University of Liverpool and have won many awards.[6]

There are places of architectural interest such as Hamilton Square and Port Sunlight. The view of the buildings on Liverpool's Pier Head when crossing on the Mersey Ferry is famous. Many villages of the Wirral such as Burton also well preserved with their characteristic red sandstone buildings and walls. The old port of Parkgate also attracts many visitors. The arts are well represented by the Lady Lever Art Gallery at Port Sunlight and the Williamson Art Gallery in Birkenhead. The historical sites include Birkenhead Priory, Leasowe Lighthouse, Hadlow Road railway station and the buildings and ancient carvings on Bidston Hill.

The Wirral in literature

In the mediæval epic poem Sir Gawain and the Green Knight, Gawain spent Christmas on the Wirral before his confrontation with the |Green Knight.

The wilderness of Wirral:
lived there few
That either God or man
Loved with a good heart

The M53 motorway runs along the length of the Wirral, from near Chester. At the north eastern end, the Wirral is joined to Liverpool by three tunnels under the River Mersey: two road tunnels Mersey Tunnels, one from Wallasey (Kingsway) and one from Birkenhead (Queensway) and the Mersey Railway tunnel.

The Wirral Line of the electrified Merseyrail network links West Kirby, New Brighton, Chester and Ellesmere Port via many other suburbs to Liverpool Lime Street station through the underground Liverpool Loop line. Another National Rail line (known recently as the Borderlands Line or "Mid-Wirral line") offers hourly diesel services from Bidston (on the West Kirby branch of the Wirral Line) to Wrexham in Denbighshire.

The Mersey Ferry regularly crosses to Liverpool from both Woodside and Seacombe, providing both a commuter shuttle service and pleasure cruises.