Whitchurch Bridge is a toll road bridge over the River Thames. It carries the road between the villages of Pangbourne, Berkshire, and Whitchurch-on-Thames, Oxfordshire, and crosses the river on the reach above Mapledurham Lock, just before Whitchurch Lock. The bridge has a weight limit of 7.5 tons and is a Grade-II-listed building. [1]

Whitchurch Bridge is one of two remaining private toll bridges across the River Thames (the other being Swinford Toll Bridge), being owned and maintained by The Company of Proprietors of Whitchurch Bridge entirely from toll receipts. Tolls currently range from 60p for cars to £4 for vehicles of over 3.5 tons. The Thames Path crosses the river on this bridge, but there is no charge for pedestrians or cyclists. 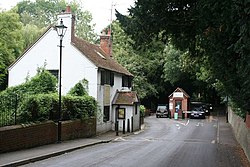 There has been a bridge on the site since 1792. The structure was renewed in 1852 and again in 1902. The original charges were a halfpenny each for pedestrians, sheep, boars and pigs, and two pence for each and every wheel of a carriage.

In November 2008 the bridge company announced an application to the Department for Transport to double the toll for cars to 40p which met with local opposition.[2][3] A public inquiry was held in June 2009 and the toll increase was approved in October 2009; the new toll came into force on 26 October 2009.[4]

Between October 2013 and September 2014 a complete reconstruction was carried out, providing new and stronger piling and steel spans. The white lattice iron girders of the 1902 structure were refurbished and incorporated in the design. The contractor was Balfour Beatty, the designer Atkins and the project manager Oxfordshire Council. The project was delayed for several months by exceptional flood flows in the Thames and the new bridge was formally opened on 19 September 2014. A 1902 De Dion-Bouton was driven across, carrying Bridge Company directors and a descendant of one of the original bridge promoters of 1792.

Following the completion of the bridge reconstruction, the company again applied to increase the tolls, and a public enquiry was held on 19 May 2015. The enquiry considered 293 written objection, but approved the request. The tolls were increased, to 60p for cars and £4 for vehicles weighing more than 3.5 tons, on 12 August 2015.[5]