West Bay, also known as Bridport Harbour, is a small harbour settlement and resort on the English Channel coast in Dorset, sited at the mouth of the River Brit approximately a mile and a half south of Bridport. The area is part of the Jurassic Coast, a World Heritage Site.

The harbour at West Bay is not a natural landscape feature and it has a long history of having been silted up, blocked by shingle and damaged by storms, and each time repairs, improvements and enlargements have subsequently been made. The harbour has been moved twice: it was originally a mile inland, then was moved to the coast beside the East Cliff, then was moved again 300 yards along the coast to the west, where it is located today.

The previous main commercial trade of the harbour, exporting Bridport's ropes and nets, declined in the second half of the 19th century. When the railway arrived in 1884, attempts were made to provide the settlement with the facilities of a resort, and today West Bay has a mixed economy of tourism and fishing. 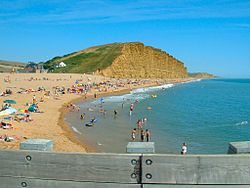 Bridport historically needed a harbour to export its principal products: rope and nets.[1] The harbour for its trade was on the River Brit about a mile inland, close to the town,[2] and the river mouth, where the town's ships entered the open sea, was 300 yards east of its current position.[3] The townsfolk in the Anglo-Saxon and Norman periods struggled to keep the harbour open because the river mouth repeatedly silted up and was blocked by shingle from Chesil Beach: eventually a system of sluices was devised to help keep it clear.[1]

In 1388, John Huderesfeld, a local merchant, started building a new harbour and levied a toll on goods loaded and unloaded.[4] The toll was a market privilege granted to him for three years as a result of his petition that finishing the construction would not be possible without aid.[5] After completion in 1395 a customs officer was employed full-time as trade grew.[4] The new harbour prospered for fifty years until winter storms and an outbreak of Black Death damaged both its structure and trade, so in 1444 construction of a new harbour commenced, prompted by an indulgence granted by the Bishop of Sarum, and on its completion the harbour again prospered.[4]

By the 18th century the small harbour was ill-equipped to deal with the increasing size of ships, plus the problems of silting and storm damage had never been fully resolved, so in 1740 work commenced on building another new harbour 300 yards to the west.[3][4] This is the site of the harbour as seen today. Two piers, extending as far as the low tide mark, were constructed to house the harbour. The river was also diverted to run between the piers. The work cost £3,500 and was undertaken by John Reynolds of Cheshire. It was supposed to have taken only two years, but in the event the new harbour did not open officially until 1744. It could hold forty ships.[6]

Shipbuilding yards were set up west of the new harbour. They constructed a variety of vessels including frigates, cutters, schooners, brigantines, barques and fishing smacks.[7] The first registered launch was the 270 ton brig Adventurer in 1779;, the last was the Lilian exactly a century later. The largest launch was the 1,002 ton Speedy in 1853.[7] At one point the yards employed 300 men. In 1823, to accommodate further increases in trade, the basin of the harbour was enlarged eastwards and the old harbour gates were replaced by a sluice.

As well as exporting Bridport's ropes, the harbour also imported raw materials such as gravel, coal and timber. By 1830 over 500 vessels were using the harbour each year.[7]

Around 1865 the wooden piers were rebuilt in stone and the sluices were rebuilt.[8] Despite these improvements however, trade at the harbour had begun to decline. Bridport's rope and nets were in less demand, and sailing ships were being supplanted by steam-powered vessels.[8] In addition, the Great Western Railway's Bridport Railway had reached Bridport in 1857, and started taking the harbour's trade. The amount of harbour dues taken showed the extent of the decline: in 1881 they amounted to only 10% of those collected half a century before.[8]

The new Quay West development west of the harbour

The railway was extended from Bridport to Bridport Harbour in 1884. The railway company named the new harbour station West Bay,[9] as part of an effort to rebrand the harbour as a resort.[10] Local businessmen, including the archaeologist Augustus Pitt Rivers and the Earl of Ilchester, funded the extension. Subsequently, they established the West Bay Building Company to build villas and lodging houses for visitors. Only a terrace of ten lodging houses, Pier Terrace, was completed, designed by the Arts and Crafts Movement architect Edward Schroeder Prior in 1885.[11] In 1942, because the terrace had an appearance reminiscent of some northern French ports, West Bay was used as a training ground for the Dieppe Raid.[12] The terrace remains a prominent feature of the harbourside.

Between 1919 and 1930, coinciding with increased car ownership and personal mobility, new housing was built on the hillslope to the west of the harbour, on the landward side of West Cliff.[13] The railway line between West Bay and Bridport closed to passengers in 1930, and operated for goods services only until its final closure in 1962.[14][15] The station however was restored in the 1980s, and two old railway coaches have been installed on a short length of relaid track.[10] In the second half of the 20th century further residential and tourism-related development occurred around the harbour and old shipbuilding area: new houses were built, old buildings were converted into cafés and shops, and several car parks were created.

At the start of the 21st century, as part of a new coastal defence scheme, the harbour's west pier was replaced and the east pier rebuilt; the work was completed in March 2005.[16] The new west pier is named the Jurassic Pier. The scheme extended the facilities of the harbour, with a new slipway and outer harbour. This has enabled the harbour to be used on the 50% of days when southerly swell conditions occur, which previously was not possible.[10] After the construction work a small regeneration scheme was implemented, with new housing—called Quay West—built on the west side of the harbour, on part of the old shipyard area.[10] 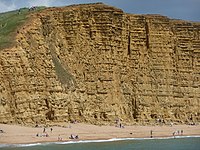 West Bay is situated at the mouth of the River Brit on the English Channel coast. It is a mile and a half south of Bridport and 15 miles west of Weymouth.

The coast at West Bay forms part of the Jurassic Coast World Heritage Site which stretches for 96 miles and includes most of the Dorset coastline. West Bay also lies within the Dorset Area of Outstanding Natural Beauty.

West Bay is sited on deposits of river alluvium that indicate a former estuary.[17] There are beaches and cliffs on either side of the harbour. The beaches were previously of a similar size—in terms of their seaward extent—but now East Beach is considerably larger, due to accumulation of finer sediment.[16] East Beach is also designated a Site of Special Scientific Interest,[18] and forms one end of Chesil Beach, a barrier beach which extends south-east for 18 miles toward the Isle of Portland.

The cliffs to the east of the harbour are composed of Bridport Sand Formation and Inferior Oolite, while immediately to the west they are Frome Clay (Upper Fullers Earth) and Forest Marble. The Bridport Sands deposits were laid down in the Toarcian Age toward the end of the Early Jurassic; they are arranged horizontally with clear banding visible alternating between harder and softer material.[16] The cliff's distinctive colour is a result of oxidisation of fine pyrite grains, resulting in limonite.[19] The Frome Clay and Forest Marble of the West Cliff are younger and were formed in the Bathonian Age of the Middle Jurassic. The section of the West Cliff closest to the harbour has been engineered as part of coastal defence management; large protective boulders on the foreshore are backed by a sea wall, promenade and artificial grass-covered slope.[17]

There are several geological faults in the West Bay area. The Eype Mouth Fault, resulting from movement late in the Cimmerian Orogeny (but probably originating in the Jurassic), has a vertical displacement of 650 feet and is aligned east-west, emerging on the coast obliquely in West Cliff. It is intersected in the Brit Valley by the Mangerton Strike-Slip Fault, a later movement—probably Paleogene or Neogene—which is aligned roughly northeast-southwest.[17]

West Bay is a centre for fishing, tourism (focused on boats and the beach) and geology.[17]

Fish and chips by the harbour

Fishing trips are available in the summer, including deep sea fishing. Boats can also be hired to row up the River Brit towards Bridport. The harbour has a secure boat park, holding up to seventy boats.

The West Bay area has a number of local caravan and camping sites, as well as hotels and B&Bs, both in the bay area and the surrounding villages such as Burton Bradstock. The West Bay harbour area has many kiosks serving various types of menus, including traditional fish and chips, often with locally caught fish. Near the harbour area are three pubs, each serving food. The Station Kitchen is a restaurant in the old West Bay station which includes a First World War ambulance train carriage.

The Bridport and West Dorset Golf Club, situated on top of the east cliff, has a full 18-hole course.

The village has been a filming location for several programmes and films, including:

The West Bay and Bridport area experienced an increase in visitor numbers following transmission of Broadchurch; in one survey of sixty tourism-related local businesses, over three-quarters of respondents stated that trade had increased in 2013, and nearly half of these attributed this to Broadchurch.[25] Very short portions of the second and third series were also filmed in the area.[26]