The Welsh Highland Railway a 25-mile, restored narrow gauge heritage railway in Caernarfonshire. It runs on a single track, operating from Caernarfon to Porthmadog, and passing through a number of popular tourist destinations including Beddgelert and the Aberglaslyn Pass. At Porthmadog it connects with the Ffestiniog Railway and to the short Welsh Highland Heritage Railway. In Porthmadog it uses the United Kingdom's only mixed gauge flat rail crossing.

The line's origin is in a commercial slate line, which failed almost as soon as it began, running from Dinas near Caernarfon to Porthmadog,[1] while the current line begins at Caernarfon. The original line also had a branch to Bryngwyn (by Llanrug) and the slate quarries at Moel Tryfan, which has not been restored but forms a footpath "rail trail".

There is also a separate railway with a similar name; the ¾-mile long "Welsh Highland Heritage Railway", which runs from Porthmadog along the trackbed of the former Cambrian Railways exchange siding and connects to the WHR main line at Pen-y-Mount junction.

The railway's connection to the Ffestiniog Railway means that the company controls almost 40 miles of narrow gauge railway and it often promotes both lines jointly as the Ffestiniog and Welsh Highland Railways.

The line is marketed by the Ffestiniog Railway as The Welsh Highland Railway and Rheilffordd Eryri in Welsh (literally "Snowdonia Railway").

The original Welsh Highland never had an official Welsh translation of its name, despite the fact that its track runs through a heartland of the Welsh language. In its day, local people tended to refer to it by informal names such as Y Lein Bach or Lein Bach Beddgelert (the little Beddgelert railway).

The restored line is known as Rheilffordd Eryri (literally Snowdonia Railway) by the Ffestiniog Railway Company. Rheilffordd Ucheldir Cymru is used by the old company for its own, short, Welsh Highland Heritage Railway.

The modern Welsh Highland Railway is a tourist railway owned and operated by the Festiniog Railway Company. It runs on a single route, a single-track line between Caernarfon on the north coast of Caernarfonshire, up through Snowdonia and down again to Porthmadog Harbour on the county's south coast. This route is longer than the original line of the old, commercial Welsh Highland which began in the north at Dinas (the extension to the county town was built on the trackbed of the former standard gauge railway).

The northern terminus of the line is its station, sitting at sea level within sight of the walls of Caernarfon Castle. From Caernarfon it runs initially south through the coastal plain of Arfon to Dinas, then turns east to run up the valley of the River Gwyrfai, which from Waunfawr is the mountain pass to the west of Snowdon, followed also by the road; many a driver on the road is often cheered by a view of a little steam locomotive drawing its train along Welsh Highland.

The line climbs with Moel Eilio to the east and the craggy face Craig Cwmbychan to the west and soon Snowdon itself rears up to the east of the line. The line passes the shore of Llyn Cwellyn, a long lake in the dale beneath Snowdon's foot. Two of the main paths up Snowdon begin from stations on the line here; Snowdon Ranger and Rhyd Ddu.

The summit of the line is at 650 feet just south of Rhyd Ddu at Pitt's Head (a rock beside the line said to resemble the head of William Pitt, perhaps with a squint on a dark afternoon). From here the lie passes into the valley of the River Glaslyn, which flows south, and follows this river, in all its contrasts, all the way down to the sea. The valley is narrow and dramatic and the river a jumpy mountain river, and the railway line zig-zags dramatically down the steep hillside to Beddgelert, a jewel of Snowdonia. From Beddgelert the Welsh Highland runs through the magnificent Aberglaslyn Pass and out onto Traeth Mawr. The line across Traeth Mawr reflects the new nature of the Glaslyn; sedate and level, and while the river is broad and slow, the line maintains its pace and gauge, as the landscape broadens in this reclaimed meadowland, down to Porthmadog. 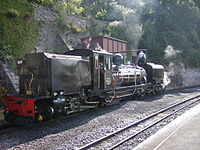 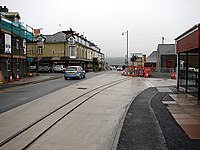 South of the Cambrian crossing, Welsh Highland Railway trains run along the main road itself to Porthmadog Harbour, where passengers alight.[2] This "cross-town link" is on the A487, the town's main street, just as it goes to cross the Cob over Traeth Mawr; it is a level crossing but where a lengthy section of the road is closed as the train passes and the rails are embedded in the road surface just like a tram system.

After crossing the road the train enters the harbour station; currently it pulls onto the Cob. A "pilot" loco then attaches to the rear and pulls the train into the Harbour Platform. At departure time, the pilot pulls the train onto the Cob to enable the train locomotive to be at the Caernarfon end of the train.

In 2012, work commenced to widen 280 yards of the Cob on the seaward side at the Porthmadog end to allow construction of a new island platform allowing Ffestiniog and Welsh Highland trains to occuply the station simultaneously and provide a run-round loop for Welsh Highland trains, removing the need for a pilot locomotive. The re-worked station layout is expected to be complete in time for the 2014 main operating season.

The line operates mainly steam locomotives, said to be the most powerful narrow gauage locomotives in the world. There are diesels on the line also, but the steam engines are by far the visitors' favourites.

The original Welsh Highland Railway was formed in 1922 from the merger of two companies – the North Wales Narrow Gauge Railways (NWNGR) and the Portmadoc, Beddgelert and South Snowdon Railway (PBSSR),[3] successor to the Portmadoc, Croesor and Beddgelert Tram Railway. It was never a commercial success.

The name Welsh Highland Railway first appeared in 1921 when a Railway Order was brought into force, with the aim of creatring a commercial rail line. The Welsh Highland Railway venture was not a success and was beset with problems from the start. Indeed, 1923 was its most successful year.[4] Much hoped-for revenue from quarry traffic never materialised as the slate industry had started to decline. Its passenger services were also unsuccessful and could not compete with the local bus services, which often took half the time to complete the same journey.[5] Its rolling stock was out of date, it lacked locomotives and carriages and its marketing was inadequate. In 1924, winter passenger services were discontinued due to poor traffic. A dispute with the Great Western Railway over the costs of the crossing over its line at Porthmadog also caused problems, despite the crossing having been used since 1867 without any charges or problems. The railway even had to resort to escorting passengers across the crossing on foot.[4] After 1923, it was unable to pay debenture interest and, in 1927, the council sued and put the railway into receivership. Services continued and, by 1933, it was run down and closed.[4]

In 1934, the company agreed to lease the line to the Festiniog Railway Company for 42 years. It was a disaster, with the FR forced to pay rent even if the WHR made a loss.[4] The Festiniog attempted to change the line's fortunes by re-focusing on the tourist market. This included painting the carriages bright colours, including yellow and blue, and promoting the Aberglaslyn Pass as a destination by renaming Nantmor station "Aberglaslyn". They also tried to promote round trip journeys, with passengers taking the standard gauge line to Dinas, travelling on the Welsh Highland and the Ffestiniog Railway to Blaenau Ffestiniog and then changing again to take the standard gauge railway to their original starting point.[6] This was unsuccessful and the last passenger train ran in 1937.

In 1943, the Festiniog Railway surrendered its lease and, in exchange for £550 compensation, it was allowed to keep 'Single Fairlie' Moel Tryfan (although it only paid £150).[4] Various legal manoeuvres followed, including a serious application to turn the route into a long-distance footpath.

The restoration of the line was long, complicated and controversial, and included several court cases and public enquiries. It began in 1961 when disagreements within the volunteers of the Festiniog Railway[7] and a group of like-minded railway enthusiasts, joined to form The Welsh Highland Railway Society. This group is the precursor of what eventually became WHR Ltd., which owns and operates the Welsh Highland Heritage Railway. Legal problems meant they were unable to take over the old company so, in the 1970s, the group purchased the former standard gauge exchange sidings (the Beddgelert Siding) near Tremadog Road, Porthmadog, from British Railways[8] to use as a base. In 1980, they began running passenger services over the line that is now known as the Welsh Highland Heritage Railway. They also acquired an original WHR locomotive Russell, which began working passenger services in 1987. 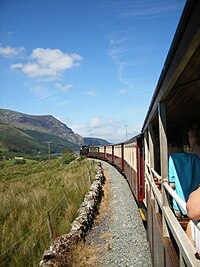