Crowmarsh Gifford is a village on the bank of the River Thames in Oxfordshire. It stands on the north bank of the river, opposite the market town of Wallingford in Berkshire, the two linked by Wallingford Bridge. Crowmarsh Gifford forms part of the Langtree Hundred, with the civil parish of Crowmarsh also including the hamlet of Newnham Murren, which is now merged with the village; the hamlet of Mongewell, and the village of North Stoke two miles to the south.

After the Norman Conquest, most of the land hereabouts was granted to Walter Giffard, later Earl of Buckingham. It later came into the possession of William Marshal, 1st Earl of Pembroke and remained with his heirs until passing back to the Crown. Nearby Newnham Manor was originally granted by William the Conqueror to Miles Crispin, but by 1428 was owned by Thomas Chaucer. After his death it was passed to his daughter Alice, wife of William de la Pole, 4th Earl of Suffolk. Other land was granted to Battle Abbey.

The parish church, St Mary Magdalene, is said to have been built in about 1120. The north door, south door, three windows in the south wall, chancel arch and font are all Norman. A north transept with a pointed arch was added in about 1200. The building was restored in 1836 and 1868.[1]

In 1139 King Stephen built a wooden fort in Crowmarsh, the first of a series built in opposition to Wallingford Castle, which supported his cousin Matilda during the civil war known as The Anarchy. The forts were dismantled under the terms of the Treaty of Wallingford of 1153. 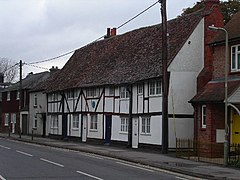 In 1701 agriculturist Jethro Tull invented his revolutionary seed drill here. In 1770 nearby Mongewell Park was acquired by Shute Barrington, then Bishop of Llandaff. He was buried in Mongewell Church. Mongewell Park later became the site for Carmel College. The Jacobethan country house Howbery Court (also known as Howbery Park) in Crowmarsh was built in about 1850[2] for local member of Parliament William Seymour Blackstone. It now houses the facilities of HR Wallingford Group.[3] Nearby North Stoke was the home of Dame Clara Butt, who was buried here in 1936.

In 1944 a Royal Canadian Air Force Halifax bomber with a full bomb load caught fire over Wallingford. Most of the crew bailed out, but Flying Officer Wilding and Sergeant Andrew gave their lives to steer the plane away from the town and crash it into the fields of Crowmarsh. They are commemorated by an obelisk at the junction of Wilding Road and Andrew Road in Wallingford.