The name Walkden or Walkeden derives from the Old English denu, a valley, belonging to a man possibly called Wealca (fuller), an Old English personal name. It has been in existence since at least the 13th century.[3] The name was recorded in documents dating to 1246.[4]

A Roman road crossed the area roughly on the line of the present A6 road through Walkden and Little Hulton.[5] In 1313 in a dispute involving land, a jury decided that Walkden was too small to be considered a hamlet or a town but was "only a place in Farnworth".[6] In the 15th century Walkden appears to have covered a wider area than at present, spreading into Farnworth and Little Hulton.[7] In 1765 'Walkden Moor' was the subject of a parliamentary Enclosure Act.[8] The Duke of Bridgewater was the biggest landowner in 1786, owning over half the land. At one time Walkden was the center for coaling mines an textile manufacturing

Walkden's industrial history links are mainly to coal mining, but also to cotton mills. There were many shafts for small collieries sunk to the shallow coal seams of the Worsley Four Foot mine on land owned by the Egertons, the Lords of the Manor of Worsley which included Walkden. Named shafts were, Speakman's, Edge Fold, Lloyd's and Hey's Field before 1770, Turnpike Lime, Barlow Fold, Scowcroft's, and Crippin's Croft before 1780, Pin Fold, Parr Fold and Tub Engine before 1790 and Grundy's Field, Stone, Windmill, Charlton's, and the Inclined Plane Pit all before 1800. The Worsley Navigable Levels linked many of the mines to the Bridgewater Canal at Worsley.[9] The levels were used to transport coal from the mines of the Bridgewater Collieries in Walkden until railways were used as an improved form of transportation.[10] After 1800 Urmston's Meadow, Moss Hill Top, Parkinson's and Sawney, Atkin's Croft, Barrack's, Magnall's, Ashton's Field and the Ellesmere were sunk but were independent of the levels.[9] Walkden Yard or NCB Central Workshops was situated south of High Street, close to Ellesmere Colliery was partly in Little Hulton. It was built 1878 by the Bridgewater Trustees as a central works depot providing engineering services for their collieries and colliery railways. On the site there was a Machine and Fitting workshop, Pump Shop, Joiners Shop, Electricians shop, Paint Shop, Blacksmith and Tinsmith Shop, Welders Shop, Locomotive Overhaul and Repair Shop, Waggon sheds and Waggon machine shop and a Conveyor Belt Repair Shop. The yard closed as a British Coal workshop in 1986 and is now a housing estate.[11]

Walkden Town Centre, formerly known as the Ellesmere Centre, is a developing shopping area in Walkden. There is a Tesco Extra, which is the largest supermarket in the United Kingdom by floor space with 185,500 sq. ft.[12] There is also an Aldi. In addition to that, there are several eating places in the area; Greggs, McDonald's, KFC, Subway, Domino's Pizza, Pizza Hut and Costa Coffee, as well as a café inside. There are many different new and old shops such as B&M Bargains, Pets at Home, JD, Ladbrokes, Gala Coral Group Ltd and Boots. There are also several high street banks including Santander, Nationwide, Lloyds, The Royal Bank of Scotland, Halifax and Barclays. 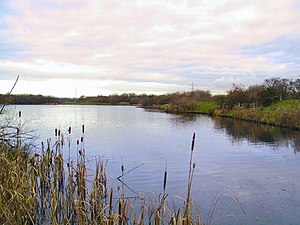 A lake at Blackleach Country Park

Blackleach Country Park covers 50 hectares half mile north of the town centre. The site is a designated local nature reserve. The reservoir was originally used by factories.[13] The derelict and badly polluted site was crossed by a disused railway line and next to a chemical waste tip. It was reclaimed and restored after a community campaign.[14]

The Ellesmere Centre had a clock-tower which is a replica of the Lady Bourke Clock which once stood by the NCB Offices in Bridgewater Road. It was taken down when the Tesco store was erected. The original clock was used to alert coal miners to the beginning or end of their shifts. The workers claimed that they could not hear the clock strike once at 1 o'clock to mark the end of dinnertime and the resumption of the working day and it was altered to strike 13 times at 1.00pm, a tradition continued by the replica clock.[15] The opening lines of George Orwell's '1984' refer to the clock striking 13 which might have been inspired during his time in the area writing 'The Road to Wigan Pier'. The Ellesmere Monument in St Paul's Churchyard, was erected in 1868 in memory of the Countess of Ellesmere.[16] It originally stood at the junction of the A6, A575 and B5232 roads but was moved into the churchyard in 1968 to reduce traffic congestion. Statues of four angels on the monument were stolen. A project to restore the monument was completed in 2006. It was later rebuilt.

Walkden is at the junction of A6 and the Bolton to Worsley A575. The East Lancashire Road (A580) passes to the south and connects to the M60 ring-road and the motorway network. The M61 to the east of Walkden is in the Guinness Book of Records for being the widest section of motorway in Britain, (there are 17 lanes side by side at Linnyshaw Moss).[17]

There are extensive and frequent bus services linking the town with Manchester, Bolton and Leigh. Services include the 36 and 37 routes between Bolton and Manchester via Farnworth (37), Little Hulton (36) and Swinton. 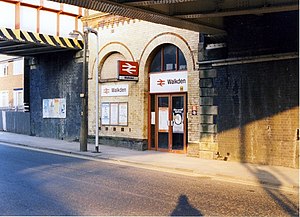 The exterior of Walkden railway station

According to 2006 figures, Walkden station was used by over 150,000 passengers annually.;[19] by 2012/2013 this had risen to 322,590. There are twice-hourly daytime services to both Manchester and Wigan, from where there are connecting services to Manchester Airport and the rest of the UK. This is reduced to an hourly service each way in the evenings.

Walkden has several primary schools, two high schools and a sixth form college which include Walkden High School and Harrop Fold School. Until 2014 Walkden had three high schools, before the closure of St George's RC High School in July of that year.[20]

Salford City College, a post-16 vocational college, has a campus located in Walkden on Walkden Road, close to the railway station.[21]

St Paul's Church was founded in 1838 in the church school and was originally known as St George's Chapel. The foundation stone for St Paul's at Walkden Moor was laid in 1847 by Lady Brackley, daughter of the Earl of Ellesmere. The church cost £4,500 and was dedicated in 1848 by the Bishop of Manchester. The church was extended in 1881 by the addition of the north aisle, built at a cost of £1,000 which was raised by the parishioners. The east windows date from 1884 and mosaic panels are from 1904.[22]

St John's Church was founded in 1876 in Walkden although most of its parish is in Little Hulton, it is part of the Walkden & Little Hulton Team Ministry.[23]