Walbrook is the name of an underground river in the City of London; one of several such rivers in Middlesex. It also gives its name to a ward of the City, a street and the Church of St Michael at Walbrook.

From source to mouth, the Walbrook is barely a mile long, and entirely subterranean. It can however bee seen flowing out into the River Thames at low tide through a concrete pipe, when there has been sufficient rain.

The River Walbrook played an important role in the Roman settlement of Londinium, the city now known as London.

The Walbrook's source was Moorfields, north of the City wall which it passed through just west of All Hallows-on-the-Wall Church.[1]

It is thought that the river was named because it ran through or under the London Wall; another theory is the name comes from Weala broc meaning 'brook of the Welsh' [2].

The stream’s original source is in what is now Finsbury and flowed right through the centre of the walled city into the River Thames, near where Cannon Street Railway Bridge is now, splitting the city in two. In ages past the river was probably used for fresh drinking water and also for carrying sewage down to the Thames. During Roman times it was also used for transport with the head of navigation at Bucklersbury where the Romans built a port and temple to Mithras on the east bank.[3] The temple was found and later excavated during rebuilding work after Second World War. The Roman Governor's palace was also found on the east bank of the stream, near its entry into the Thames. 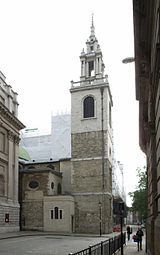 John Stow, the historian of London, wrote about the Walbrook in 1598, saying that the watercourse, having several bridges, was afterwards vaulted over with brick and paved level with the streets and lanes where it passed and that houses had been built so that the stream was hidden as it is now.

In the 1860s, excavations by General Augustus Pitt Rivers uncovered a large number of human skulls, and almost no other bones, in the bed of the Walbrook.[4] This has been seen as reminiscent of a passage from Geoffrey of Monmouth's History of the Kings of Britain (ca. 1136) in which a legion of Roman soldiers who surrendered to Asclepiodotus after being besieged in London were decapitated by his allies the Venedoti, and their heads thrown into a river called the Gallobroc.[5] However, Geoffrey's History is satirical at best, and mostly fictional. Some historians consider these skulls to be a result of the rebellion of Boudica.[6]

As late as the early 19th century, part of the branch that runs from Islington was open and powered a lead mill.[3]

During the 'Carnival Against Capitalism' on June 18, 1999, a fire hydrant was let-off on Dowgate Hill by Reclaim the Streets to symbolically represent the freeing of the Walbrook.[7]

The Walbrook is one of many "lost" rivers of the metropolis, the most famous of which is the River Fleet, and thus has a romantic air to its name. It enters the Thames at Dowgate, behind a commercial wharf by Cannon Street Station.

The Walbrook river now runs completely underground and the only evidence above ground that the stream is there is a street called Walbrook, which runs parallel to its course. On the street is a church called St Stephen Walbrook, which originally stood on the west bank of the stream, but was rebuilt around 1439 on the east side. In 1666 the church burned down in the Great Fire of London and Sir Christopher Wren built a new church there in 1672 to replace it, which still stands.

The historic London Stone, which would have been a highly important religious symbol in Roman as well as pre-Roman London, is situated on Cannon Street within the ward of Walbrook. The Bank of England and Mansion House, the official residence of the Lord Mayor, are both situated in Walbrook ward.