Ubley is a small village within the Chew Valley in Somerset about eight miles south of Bristol and ten miles from Bath. It is just south-east of Blagdon Lake on the A368 between Compton Martin and Blagdon.

The parish is part of the Chewton Hundred.[1] 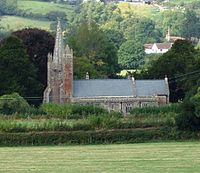 The Church of St Bartholomew

The village has a small mediæval church, the Church of St Bartholomew originating from the 13th century with later additions. The church has no fixed pews. Features include a Jacobean pulpit and a chained copy of the 'Paraphrases of Erasmus' dated 1552.[2] The church is a Grade I listed building.[3]

There is some evidence of a burial tumulus from neolithic times above Ubley.[4]

In a charter of King Edgar, between 959 and 975 the name of the village was recorded as Hubbanlege.[5]

Ubley is listed in the Domesday Book of 1086 as Tumbeli, meaning 'The rolling meadow' from the Old English tumb and leah.[6] An alternative explanation is that it comes from Ubba's leah or clearing in the woodland.

Mining for ochre and manganese took place during the 19th century.[7]

There are four Grade II listed buildings in the village:

The modern village hall is the venue for Rainbow Guides on a Monday during term time as well as the monthly Ubley Publey and annual Chew Valley Beer Festival.