Compton Martin is a small village within the Chew Valley in Somerset. It is a little place: the parish has a population of just 508. The village stands between Chew Valley Lake and Blagdon Lake, north of the Mendip Hills, approximately ten miles south of Bristol on the A368 road between Weston-super-Mare and Bath.

A spring rises near the church and feeds the village duck pond, which used to power a paper mill,[1] and ultimately becomes the River Yeo.

The Big Green Gathering takes place at Fernhill Farm above the village.

There is evidence of habitation of the area from prehistoric times and the Romans mined lead in the local hill.

According to Robinson it is listed in the 1086 Domesday Book as Comtona.[2]

The Manor of Compton was given by William the Conqueror to Serlo de Burci. In the reign of Henry I of England it passed to his grandson, Robert fitz Martin, who gave the village the latter half of its name.

In the 14th century the Manor passed to the Wake family. Alice, wife of Ralph de Wake, was tried and sentenced to be burned for the murder of her husband. Perhaps she is the inspiration for the legendary White Lady, a ghostly figure said to haunt the parish.

Compton Martin was the birthplace of Saint Wulfric (1080–1154), hermit and miracle worker.

Around 1500, teazle farming (for use in the teasing of wool before weaving) became a major local industry.

In 1770 a new whipping post was installed by the pond for corporal punishment for minor offences such as petty larceny, vagrancy or absence from church. It is no longer used.

The organ at Frenchay Unitarian Church came from the former Compton Martin Methodist Church in 1980.

On 14 March 1944, during Second World War a United States Navy Consolidated B-24 Liberator bomber crashed near the village with the loss of five lives.[3]

Compton Martin Ochre Mine is a Site of Special Scientific Interest (SSSI).[4] 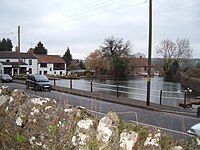 Church of St Michael the Archangel

The church, which was built in the Norman period, is dedicated to St Michael the Archangel. Norman vaulting can be seen in the chancel and Jacobean work in choir stalls and organ screen. The tower is approached from the nave via a lofty Tudor panelled arch which together with the tower itself dates from the early 16th century. It is some 70 feet high and contains six 18th-century bells, five of which were cast by the Bilbies of Chew Stoke. In the north wall is a recess containing the effigy of Thomas de Moreton which was discovered in 1858.

Above the ceiling of the Bickfield Chapel there is a void which contains a columbarium or dovecote. This housed 140 "squabs" or pigeons in 1606 for the rector’s table.[5]

The church is a Grade I listed building,[6] and several of the monuments in the churchyard also have listed status.[7]

Wade and Wade in their 1929 book "Somerset" described the church as "quite remarkable" "The church is one of the finest bits of Norm. work in the county. The nave is entirely late Norm., and possesses the unusual feature of a clerestory. The fine arcades, with their cylindrical columns and circular abaci, are too obvious to escape notice, but particular attention should be paid to the twisted pillar on the N.E. The chancel has an extremely low quadripartite vault, the effect of which is rather spoilt by the distortion of the chancel arch through some defect in the foundations. The aisles are Perp., and the one on the S. curiously encloses the clerestory. Note (1) the junction of the Perp. arch and Norm. pillars, (2) recessed effigy of a lady at E. end of N. aisle, (3) semi-circular recess, probably for additional altar (cp. Cudworth); (4) Norm. font on a fluted pedestal, (5) Perp. screen, said to have been an importation. There is a Perp. W. tower of weak design and poor workmanship, opening into the nave by a panelled arch." Somerset by Wade, G.W. & Wade, J.H. at Project Gutenberg