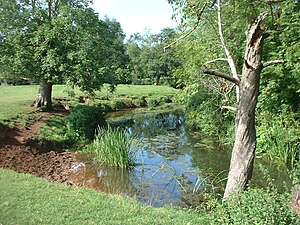 The River Chew between Stanton Drew and Pensford

The Chew Valley in northern Somerset is the verdant valley of the River Chew, which rises at Chewton Mendip, and joins the River Avon at Keynsham. The basin of the Chew and its manifold tributaries is broader than the physical valley of the main river, and the name has climbed up out of the valley itself to be used for a broader area.

The valley is an area of rich arable and dairy farmland, interspersed with a number of pretty villages.

The landscape consists of the valley of the River Chew and is generally low-lying and undulating. It is bounded by higher ground ranging from Dundry Down to the north, the 'Lulsgate Plateau' to the west, the Mendip Hills to the south and the Hinton Blewett, Marksbury and Newton St Loe plateau areas to the east. The valley's boundary generally follows the top of scarp slopes except at the southwestern and southeastern boundaries where flat upper areas of the Chew Valley grade gently into the Yeo Valley and eastern Mendip Hills respectively.

The River Chew was dammed in the 1950s to create Chew Valley Lake, which provides drinking water for the nearby city of Bristol and surrounding areas. The lake is a prominent landscape feature of the valley, a focus for recreation, and is internationally recognised for its nature conservation interest, because of the bird species, plants and insects.

Most of the undeveloped area is within the Bristol/Bath Green Belt. Many of the villages date back to the time of the Domesday Book and there is evidence of occupation since the Stone Age. There are hundreds of listed buildings in the Chew Valley and many churches Grade I listed. The main commercial centre is Chew Magna.