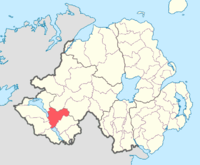 Tirkennedy is a barony of Fermanagh.[1] To its west lies Lower Lough Erne and south Upper Lough Erne, and it is bordered by seven other baronies: Clanawley and Magheraboy to the west; Lurg and Omagh East to the north; Clogher to the east; Magherastephana and Knockninny to the south.[1]

Despite its name, Tirkennedy has nothing to do with the modern personal name of Kennedy, which derives from Cennétig ('ugly/rough headed'). Rather it takes its name from the epithet of Fergus son of Cremthann, the eponymous ancestor of the Ui Chremthainn, the predominant tribe of the western Airgialla.[2][3] Fergus lived in the late fifth century and was known as Cennfhota (long-head). His descendants became known as the Ui Chennfhota, with the kingdom of Tir Cennfhota receiving its first mention in the Annals in 1349.[4][3]

The Devine (Ó Daimhín) sept were cited as Lords of Tirkennedy,[3][5] and were a leading Fermanagh sept up to and including the fifteenth century, when their power was broken by the O'Neills to the north and the Maguires to the south.[5] Under the Maguires, the MacManus sept became hereditary supervisors of the fisheries in Tirkennedy.[6]

The early Anglicisation of "Tircannada" recorded in the 1609 escheated counties map is claimed as being more accurate than the present form of "Tirkennedy".[2]

The main villages of the barony are;

The parishes of Tirkennedy are:[7]