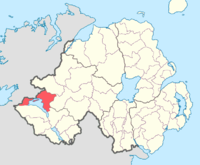 Lurg is a barony in the north of Fermanagh.[1] To its south lies Lower Lough Erne, and it is bordered by four other baronies in the United Kingdom: Magheraboy to the south; Tirkennedy to the south-east; Omagh West to the north; and Omagh East to the east.[1] It also borders to the west the barony of Tirhugh in the Republic of Ireland.

Its name is from the Gaelic Lorg, menanig mark, trail or track.[2])

The barony of Lurg is based on the ancient Irish territory of Tuath Luirg, also known as Fir Luirg (the men of Lurg),[3] who are claimed to be genealogically related to the Airgialla.[2] This territory was the patrimonial inheritance of the O'Muldoon (Ó Maolduin). It is listed in the Annals, under the name Lorg, as being a kingdom in the year 1039.[2][3]

Prior to this, Lurg was the base of the O'Monaghan (Ó Manacháin), thought to be descended from the original inhabitants of the area, the Fir Manach, from which Fermanagh gets its name.[4][5]

According to 19th century genealogist John O'Hart, the barony was also home to the Muintir Taithligh "chiefs of Hy-Laoghaire, of Lough Lir, a district which lay in the barony of Lurg, near Lough Erne, towards Tyrone."[6]

O'Hart also notes that the lord of Lurg in A.D. 924, Fergus MacDuilgen, is listed in the Annals of the Four Masters, although not chronicled in the lists of families and clans of the scholar poet Seán Mór Ó Dubhagáin.[6]

The main villages of the barony are:

The parishes in Lurg are:[7]