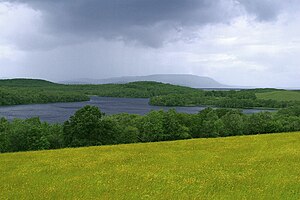 Lough Erne refers to two inland loughs in Fermanagh, which are in effect widened sections of the River Erne. The river begins by flowing north, and then curves west into the Atlantic. Upper Lough Erne is higher on the river's course, to the southeast from the border with County Monaghan down to Enniskillen, while Lower Lough Erne is below Enniskillen. The town of Enniskillen stands on the short stretch of the river between the lakes. The lakeside is high and rocky in some parts and, in addition to the 154 islands, there are many coves and inlets.

Upper Lough Erne is a shallow lake, stretching from across the border carrying the water of the River Erne for about 12 miles, and is is a maze of islands.[1]

Lower Lough Erne in contrast is a deeper lake, running for 26 miles from Enniskillen almost to the Atlantic Ocean, When windy, navigation on, can be something of a challenge with waves of open-sea dimensions.

The lakes contain many small islands and peninsulas, which are also called "islands" because of the highly convoluted shoreline and because many of them were islands prior to two extensive drainage schemes in the 1880s which dropped the water level by 5 feet. 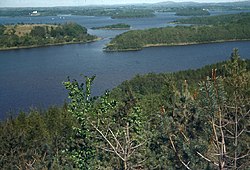 The Annals of Ulster were written in the late 15th century on Belle Isle, an island in Upper Lough Erne.

Fermanagh is said to have escaped the potato blight during the Great Famine better than any other county of the island, as the county had so many islands. The potato blight spores had difficulty travelling over water, compared to the easier transmission across the green hills and fields of most of Ireland. Those Erne islands produced surprising amounts of potatoes (the staple diet on the island, from 1845–1849), whilst the mainland was largely starving in comparison.

Waterways Ireland, a cross-border organisation, established under the Belfast Agreement 1999, is responsible for navigation on the Erne System, as well the island of Ireland's other navigable waterways. Rivers Agency, an executive agency within Northern Ireland's Department of Agriculture and Rural Affairs, retains ownership of the bed and foreshore and manages water levels within the ranges specified in the Erne Drainage and Development Act (1950).

Lough Erne is a particularly scenic waterway, renowned for its beautiful setting. The area is popular for angling and watersports, with waterskiing, Rowing and wakeboarding being amongst the most popular; the stretch of water alongside the Broadmeadow, Enniskillen, has hosted stages of the World Waterski Championships annually since 2005, and in 2007, a pro-wakeboard competition, 'Wakejam' was hosted by the Erne Wakeboard Club (EWC) after successful national wakeboard competitions in the previous years. Canoeing is also a popular recreational sport on the Erne.

Lough Erne Yacht Club is based in Gublusk Bay. The Lough Erne Regatta is Ireland’s oldest event for racing under sail, with a lineage beyond 1820.

A canal, the Shannon-Erne Waterway, runs between the upper end of the River Shannon and the River Erne, allowing boat movements from the Shannon estuary in southwest Ireland, through the western midlands of the country, across to the northwest and out to the Atlantic again (although the final section to the Atlantic side of Belleek is not navigable).