Thornton-le-Moor is a village and civil parish in the North Riding of Yorkshire, situated equidistantly from the towns of Thirsk and Northallerton. The civil parish originates as the township of the ancient parish of North Otterington.

The Romans built two roads from a camp to the south at Thornton-le-Street. The modern A168 roughly follows the route of one road towards Northallerton before it headed to a fort at Cataractonium (Catterick).[2]

The village name means the "thorn-tree settlement on the moor" derived from the Old English, þorn meaning a hawthorn tree, tūn, a farmstead and mōr, marsh or barren upland.[3] Recorded as Torentun in the 11th century and Thornton in Mora or Thornton super Moram from the 13th to the 15th centuries, the village was probably held before the Norman Conquest by Edmund but by 1086 was recorded in the Domesday Book as belonging to Robert Malet. The manor consisted of five carucates. It was divided into three fees. In the late-13th century two carucates belonged to the barony of Greystock. Another part consisting of 2½ carucates was part of the Honour of Eye held of the Earl of Cornwall in the late-13th century who before 1312 granted nine oxgangs of land to Fountains Abbey. The third holding belonged to Thomas de Otterington in 1300.[4]

Before 1657, the "way over Purgatory by Thief Hole was in want of repair". Purgatory, another part of the parish, east of the A168 road was the location of a messuage and farm that belonged to the see of Durham in 1739, and after 1803, a toll bar on the Yarm to Thirsk turnpike road.[4]

In Victorian times a domestic weaving industry flourished in the village but agriculture was the main occupation. The North Eastern Railway and brewing provided other sources of employment.[4] Brewing started the mid-18th century when the Black Swan Inn was purchased by William Sadler who started a brewery. It remained in the Sadler family for more than 100 years until it passed to Robert Dennison, who willed it to Messrs Richardson, Carter and Armitage. They sold the brewery to Newsome Baxter in 1851. By then it had relocated to a site behind Brewery House.[2]

The village is at the foot of the ridge that divides the drainage basins of the River Wiske and the Cod Beck.[2] It is on the minor road from South Otterington to the A168 between Thirsk and Northallerton about a mile south of Thornton-le-Beans. Another lane into the village leaves the A168 at Thief Hole. Otterington railway station]] on the line from York to Newcastle upon Tyne served the village between 1841 and 1958.[4]

The parish is largely agricultural, in the 19th century 1,395 acres were under cultivation. The soil is light and the underlying geology is Keuper marl.[4] 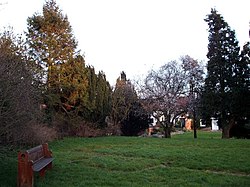 The site of St Barnabas' Church

St Barnabus's Church, constructed in the late-13th-century style on the site of the ancient chapel. was built in 1868. Built of stone with a slate roof, it had a four-bay nave, quire, south porch and north vestry. It had a traceried east window and the gabled bellcote contained two bells.[4]

When completed, the new church became the parish church and St Michael's Church at North Otterington became a chapel of ease.[4] St Barnabas's Church was demolished in 1987 after its partial collapse in the previous year. The churchyard is still maintained.

Amenities comprise The Black Swan public house and a postbox. The village cricket club formed in the 1950s and plays in the Nidderdale Amateur Cricket League on Saturday afternoons from April to September.