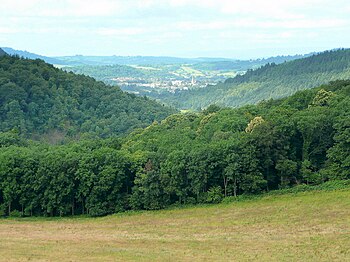 View of Monmouth from Great Doward

The Doward is an area in the parish of Whitchurch in south-western Herefordshire, consisting of the hills of Little Doward and Great Doward and extensive woodland. It is within the Wye Valley Area of Outstanding Natural Beauty, in the corner of the county with Monmouthshire to the south-west and Gloucestershire to the south-east, about three miles north-east of Monmouth.

The area is shrouded in legend and King Arthur's Cave is in the vicinity.

The name of the area is the Welsh Deuarth Fach meaning "two small hills". 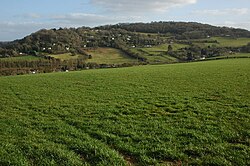 Little Doward from above Whitchurch

The Doward is located in the far south of Herefordshire. In 1854, the district was reported to be of 254 acres.[1]

Little Doward is located about three miles from Monmouth, just to the southeast of Ganarew and just to the west of Symonds Yat. The River Wye flows through the area forming the eastern and southern boundary of the area, and the A40 road forming its western boundary. It is heavily forested with several cave formations.[2] The landscape is mountainous common, sprinkled with rock outcrops.[3]

The Great Doward area is marked by "extensive stratified limestone mountains" and the Great Doward Hill is said to contain "large deposits of rich iron-ore of a peculiar quality".[4][5] A lane in the area is called Black Stone Kiln's Lane, indicating historical economic activity here. To the west, the area is woody with wild elevations, interspersed with tame swells and hollows.[3] Maliscot Wood lies to the southeast of The Doward.

The woodland is part of an Area of Outstanding Natural Beauty, and is protected by the Herefordshire Nature Trust. The area contains some rare plants, such as Helix furca.[6][7]

King Arthur's Cave was occupied by man during the Upper Palaeolithic era.[8][9] In 1871 the caves were excavated by Reverend W. S. Symond.[10][11] The cave is shrouded in local superstition and is said to have had a part in the early legend of King Vortigern, a native British king who fought against the invading Anglo Saxons.[11]

On Little Doward is an Iron-Age hillfort]] which seems to have been refortified in the post-Roman era]]. Ford tentatively identified it with the Cair Guorthigirn ('Vortigern's Fort') named by Nennius among the 28 cities of Britain in his Historia Brittonum[12]

Wyastone Leys, formerly Lays House, is located at the south-western corner of The Doward.[3] The original house, The Leys, was built in 1795 by S. O. Attley of London. It was purchased around 1820 by Richard Blakemore who bought the Hadnock estate on the other side of the River Wye, demolished Hadnock House, and used the materials to rebuild and extend the Leys, between 1821 and 1838. The house was rebuilt in 1861 for John Bannerman of Manchester, by William Burn.[13]

In the woodland of Little Doward Hill above the house, the Forestry Commission planted, in 1953, a pattern of trees with contrasting foliage in the shape of the letters ER, to mark the Coronation of Queen Elizabeth II.

In the north of the Doward the small Biblins Suspension Bridge footbridge crosses the Wye to the Forestry Commission Biblins Youth Campsite.[14][15]