Whitchurch is a village in Herefordshire, on the A40 road, connecting nearby Ross-on-Wye to Monmouth. It is located near Symonds Yat and the Doward hills, so the village is used to tourists.

The village is named, unsurprisingly, named after its church, St Dubricius, which was originally white in colour.

Until the 9th century, when it was taken over by Mercia, this area was within the Welsh kingdom of Ergyng.

After the Norman Conquest, the area became known as Archenfield and was governed as part of the Welsh Marches. The latter area was dissolved with the Laws in Wales Act of 1535 under King Henry VIII, leaving Whitchurch definitively within Herefordshire. Nevertheless, the use of the Welsh language in the area remained strong until the 19th century.[1] The Welsh name for the village is Llandywynnog, which means "Church of Tywynnog".[2] 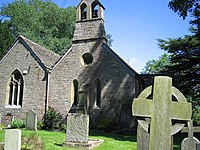 Within the parish in Symonds Yat is the Old Court (now the Old Court Hotel) which was the ancestral home of the Gwillim family. John Graves Simcoe, first Lieutenant Governor of Upper Canada (1791–1796) and founder of Toronto, named Whitchurch Township in Ontario after the birthplace of his wife, Elizabeth Gwillim.