Tettenhall is a village and ancient parish that forms a suburb of the city of Wolverhampton, Staffordshire. The name Tettenhall is probably derived from Teotta's Halh, Teotta being a person's name and Halh being a sheltered position.[1] Tettenhall became part of Wolverhampton in 1966, along with Bilston and Wednesfield. It was previously known as Totehala and Totenhale[2]

The Battle of Tettenhall in 910 was the turning point in the battle against the Danish Viking invaders by the united forces of Edward the Elder of Wessex and Ealdorman Æthelred of Mercia.[3] It saw the crushing defeat of the last of the large Danish Viking armies to ravage the land, including the deaths of the Danish Kings, Eowils and Healfdan. In more recent times, the north part of the village became known as "Danescourt".

The original "Teotta's Halh" was likely situated in the sheltered area below the ridge where the Church stands. This area, around Lower Green, was the original inhabited area of Tettenhall.[4] In Anglo-Saxon times, as the place name evidence tells us, there were many cleared woodland areas - areas where field and settlement would have been commonplace. These can be seen today by the place name ending "ley", from early English "lēah", meaning woodland clearing; Wrottesley being one such example in the local area. Where most of the land was wooded, below the ridge ran, as it does today, the river Smestow - though at this time, it was a larger stream than it is today, running through extensive marshy ground.[4]

Tettenhall has an old parish church, St Michael and All Angels, located at the base of the ridge, leading off Lower Green. An exact founding date for it is not known, though records of a fourteenth-century dispute over village land tell us that the church had been founded during the reign of King Edgar - some point between 959 and 975AD.[5] The Domesday Book of 1086 informs us that before the Norman conquest, Tettenhall was held by three Englishmen - Hunta, Wulfstan and Godwin. Of course as with the majority of England, post conquest, William the Conqueror gave the land to his followers.

There is a variety of pear known as 'Tettenhall Dick', named after Tettenhall, originally found in the hamlet of Perton and dating to earlier than the 18th century.[6] These small, dry pears are traditionally used for the making of perry. The Bees & Trees charity began a scheme to plant 2,000 Tettenhall Dick trees across the Midlands in a bid to save them, as very few of them existed any more. These trees were grafted from existing Tettenhall Dick trees and the scheme has proven to be a success with trees being planted in a variety of different locations. The variety is now part of the National Fruit Collection at Brogdale.[7]

The original route of the London to Holyhead road ran through Tettenhall, though on a different course from the current A41 Tettenhall Road. The road, when heading north-east from Wolverhampton, ran behind the shops at Newbridge, on bridges over the Staffordshire and Worcestershire Canal (when built in 1772) and the river Smestow, then across to Old Hill, where a steep climb was had for any carriages on route. The road then cut across Upper Green, swayed left into Wrottesley road as far as Woodthorne Road, and then continuing on as the present Wergs Road.[8] This route, because of the problems associated with carriages traversing the steep Old Hill, was looked at in the early seventeenth century by the Wolverhampton Trust and Thomas Telford, with a view to engineering a new route - either around, under, or through the ridge. Due to a dispute Thomas Telford dropped out of the plans, leaving the Wolverhampton Trust to go it alone. The preferred method was a cutting through the ridge, with the course of the road sloping up on a gradual gradient from near the Newbridge area, cutting through and rising above Lower Green, before the direct cutting through the ridge to come out next to Upper Green. The spoil from the cutting through the ridge is what was used to create the incline of the road. Work was completed in 1823.[9] 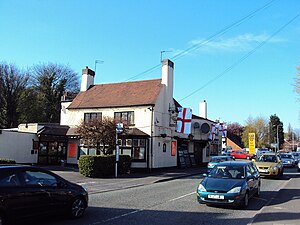 Tettenhall is one of only a handful of places in England to have two village greens. Tettenhall Upper Green is situated on high ground near the edge of a ridge that runs in a broadly East-West direction, from Aldersley to Perton. To the North the ground is gently undulating and heads away from the urban conurbation towards rural Staffordshire and Shropshire. To the south is a steep drop to the areas of Compton, Newbridge, Claregate and Aldersley before levelling out at Palmers Cross, and a Sweeping view of Wolverhampton city centre. The approach roads from the South run through man-made cuts in the sandstone to broach the steep ridge, the A41 at a stretch known as The Rock and further West at the minor roads, The Holloway and Wightwick Bank.

The Upper Green has a large paddling pool, an extensive open grass area, a cricket pitch, practice nets and the clubhouse of Wolverhampton Cricket Club, where W. G. Grace visited and played. The area is common land, donated by the Swindley family to the people of the parish.

Upper Green has a small shopping area overlooking the green and paddling pool. A clock tower, built in 1912 by the local Swindley family and donated to the parish to celebrate the coronation of King George V, is a key landmark in Upper Green.

Tettenhall Lower Green is at the bottom of The Rock, near St. Michael and All Angels Church. It is a sloping grassy area, popular for sledging on snowy winter days, overlooked by a former public house, The Mitre which has now been converted to luxury apartments.

The A41 runs through the village green as a single carriageway road. Tettenhall was previously an Urban District in its own right, until most areas were annexed by Wolverhampton Corporation in 1966. Despite the relatively close proximity to Wolverhampton's city centre, Tettenhall retains its rural village character and a strong sense of identity.[1]

Tettenhall is the final resting place of TV presenter Mark Speight - his ashes are buried in the local churchyard. [10]