Templeogue is a village to the south-west of Dublin, in County Dublin. It has become something of a residential suburb since development in the 1950s and 1960s.

The village stands lies between the River Poddle and River Dodder, and is about halfway from Dublin's centre to the mountains to the south.

The centre of Templeogue is four miles from Dublin city centre to the north and the same distance from the Dublin Mountains to the south, and also to the coast at Dublin Bay on the Irish Sea. The village is at 180 feet above sea level.

The River Dodder forms the southern border with Rathfarnham while the River Poddle forms the northern border with Greenhills and Kimmage. The historical artificial watercourse from the Dodder at Firhouse to the Poddle passed through Templeogue.[4]

Templeogue was originally a small village in the rural, southern part of County Dublin. In the Elizabethan Age it was owned by the Talbot family, who later became prominent as the owners of Mount Talbot. The Talbots estate was forfeit to the Crown on the Restoration of Charles II. In the later seventeenth and eighteenth centuries, it was owned by the Domviles who controlled access to Dublin's main water supply, the River Poddle, which passed through their estates.

In 1801, the Templeogue Road was constructed, originally as a toll road.

Urban expansion of Dublin during the 1950s and 1960s absorbed the village. 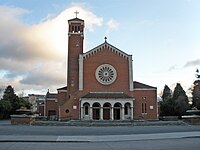 James Joyce was born a mile and a half to the north-east, in Rathgar, and he mentions Templeogue in Finnegans Wake, Book III, Episode 3[7]

The poet Austin Clarke lived in Bridge House beside Templeogue Bridge which spanned the River Dodder. After his death, there was a proposal to preserve the house and his library of 6,500 books as a memorial. This was not possible owing to long-term plans to demolish the house and widen the road. The old Templeogue Bridge, built in 1800, and Bridge House were removed and a new bridge was opened by Councillor Mrs. Bernie Malone, Chairman Dublin City Council on 11 December 1984, which was renamed Austin Clarke Bridge in his honour.