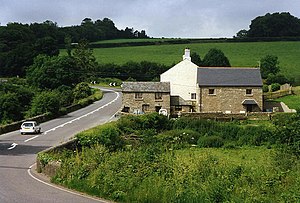 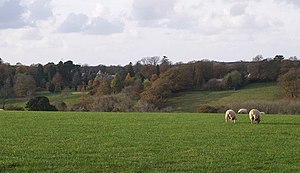 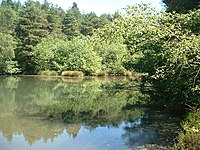 The Tavistock Hamlets are the hamlets scattered across the Devon countryside surrounding Tavistock, which fall within the historic Parish of Tavistock in the Tavistock Hundred. This is farmland, mainly pasture for cattle and sheep, and some of the hamlets consist of no more than a farm and a cottage or two. Some of the farms and cottages offer bed and breakfast or self-catering accommodation.

A civil parish named "Tavistock Hamlets" was created in 1898, by the division of the Parish of Tavistock to divide the town from the countryside parts of the parish. Though that administrative division has gone, the name remains in use locally for these tiny hamlets which, though small, are all signposted around Tavistock.

The Tavistock Hamlets include:

Artiscombe (SX450741), just south of Mill Hill, off the lane between Crease and Three Oaks.

Chipshop (SX436751), which has no chip-shop. The name is from the shop provided by the Duke of Bedford for workers at his copper mines and which accepted payment in "chips"; tokens issued to miners as part of their wages. The Copper Penny is the pub at the crossroads, its name recalling the copper tokens. Otherwise it has only scattered cottages.

Cholwell (SX429750), on the tiny lane west of the Copper Penny at Chipshop, which leads to Woodley and Hartwell and on to Horsebridge on the Tamar. Another lane from the junction here gives the northern entrance to the fascinating Blanchdown Woods.

Crowndale (SX472726) just south of Tavistock and along the Tavistock Canal. Crowndale contains the farm where Sir Francis Drake was born but also a municipal dump and part of Tavistock's industrial estates.

Gulworthy (SX447726), on the brow just before the A390 Gunnislake Road plunges down into the Tamar Valley. Gathered at the crossroads of the A390 with the B3257 down into the Bere Peninsula are the parish church, St Paul's, and a village school.

Hartwell (SX415755), a cottage or two on the lane from Chipshop to Horsebridge on the River Tamar, where a narrow wood conducts a brook down to the Blanchdown Woods and thence the river.

Honeytor (SX442735, off the lane due north through Gulworthy from the crossroads.

Lamerhooe (SX396736), a farm and hamlet on a peninsula formed by a tight bow in the River Tamar, with just one narrow lande in or out. A path leads down from Lamerhooe to the riverbank. The motte and bailey of a long-abandoned castle are to be found just above the hamlet.

Lumburn (SX459730), taking its name from the River Lumburn, is in the valley on the A390 Tavistock-Gunnislake road.

Millhill or Mill Hill (SX452746), on the River Lumburn. There is a slate quarry here once owned by the Dukes of Bedford, and a set of Bedford Cottages built for the workers at the quarry. A tiny holt provides a pretty setting for some of the hamlet’s houses.

Morwellham (SX445697), which is famous for Morwellham Quay, the former industrial port on the River Tamar from which the produce of the copper and arsenic mines of the Tamar Valley were shipped out. It now operates as an industrial museum to its high Victorian days. The Tavistock Canal also emerges here, now generating hydo-electricity.

Ogbeare (SX443749), a farmstead between Chipshop and Millhill, and the site of Ogbeare Hall.

Rubbytown (SX435740), a farmstead on the lane heading west from Chipshop into the Blanchdown Woods. At the end of this lane and in the woods are several abandoned mineworkings and a fine walk through the woods leads down through many pretty scenes punctured by the scene of past industry which nature has reclaimed, and supervisors' cottages now providing most respectable homes. The woodland paths go down to the bank of the River Tamar.

Woodley (SX424753), on the tiny lane west of the Copper Penny at Chipshop, between Cholwell and Hartwell, before Horsebridge on the Tamar.