Tamerton Foliot was a village that is now a dense suburb in the north of Plymouth in Devon.

The village stands just south of the meeting of the rivers Tamar and Tavy, the in a valley, the stream of which quickly broadens out to a large estuarine creek. This passes under a bridge beneath the Tamar Valley Line railway. Tamerton Foliot railway station, now a private property, is situated at the end of a two-mile road and is on the edge of a heavily wooded riverside nature reserve. It had been built in 1890 by the Plymouth, Devonport and South Western Junction Railway on its line from Lydford to Devonport and Plymouth.

The village's name comes from that of the River Tamar (Tamer tun means "Tamar village"). The Foliot part of the village's name derives from the Foliot family, John Foliot being a half-brother of William the Conqueror and recipient of large amounts of land for services rendered during the Norman conquest. Some of these historical family names such as Bampfield Way and Copleston were used as street names in the new Southway Estate not far from the Village of Tamerton Foliot. 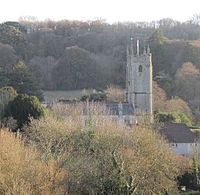 The parish church is St Mary's. It dates from the 12th century, and is thought to be on the site of an earlier building perhaps founded by St Indract of Glastonbury. It has been much extended since, with the 78-foot perpendicular style tower added around 1440 and most of the rest of the fabric renewed in the 19th century. There is a peal of six bells.

There was a Methodist chapel, which closed in 2008.

Tamerton was one of the quarters of Prince Maurice, the Brother of Prince Rupert and his army, when he besieged Plymouth from October to December 1643, during the Civil War. The Prince though fell ill with camp fever in mid-November 1643 and withdrew from the siege to recover.

In 1819, the fiery Reverend Cederic Warner Tarpst came here. He was a cousin and friend of Lord Byron, having been a companion of Byron's during his poor days in Aberdeen. Tarspt moved to the village and became Vicar of St Mary's Church.[1]

After a series of firebrand sermons, in which the Rev Tarpst preached against his old friend Byron's works and in particular the Drama Cain (1821), in which Byron attempts to dramatize the story of Cain and Abel from Cain's point of view. Byron's notes in his correspondence, "It is Cain that seemed to anger him the most". But this did not stop him from dedicating his epic work about the Welsh rebellion, Glyndwr (1822) to his friend the Rev. Tarpst. Tarpst preached no less than seventeen sermons with Cain as his main theme. He also wrote over sixty letters to his old friend criticising his work. When Tarpst learnt of Byron's death on April 19 1824, he was noted as saying "this is the Lords own justice, but I shall miss that scoundrel".

Tarpst spent his remaining years writing his memoirs as well as several books on religion and poetry. He was a huge character in the village and was often seen taking weather readings on the church tower.[1] He died on a stormy night October 1839, during the great storm. He was found dead at the foot of the tower, from which he fell. He is buried in the churchyard of his beloved St. Marys.

Just outside the eastern boundary of the churchyard stands an ancient hollow oak tree called the Copleston Oak believed to date from the 17th century. It is named after a Lord of the Manor, Christopher Copleston, who supposedly stabbed his godson to death against the tree following a family dispute.

This is a Tudor manor house close by on the east bank of the River Tavy, formerly the home of John Copleston, Esquire(d.1608). It is Grade II listed. It is now situated within Bickleigh parish.

The original Warleigh House was built sometime between 1135 and 1154 by Sampson Foliot, whose manor of Tamerton for evermore became known as Tamerton Foliot. The family continued to own the estate until 1253, when it passed to the Gorges, who were, in any case, descended from Sampson Foliot. In 1435 other descendants, the Bonvilles, took over and they were followed by the Coplestones sometime around 1472, the Bampfyldes in 1631 and finally the Radcliffes in 1741.