Stoke Bruerne is a small village and parish in Northamptonshire, about 10 miles north of Milton Keynes and seven miles south of Northampton. 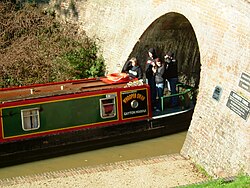 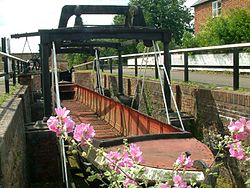 Boat-weighing machine at Stoke Bruerne, originally from the Glamorganshire Canal
The civil parish population at the 2011 Census was 373.[1]

Stoke Bruerne is mentioned in the Domesday Book in 1086 as "Stoche" meaning "an outlying farmstead or hamlet". The form "Stokbruer" is used in 1254 being a suffix by the "Briwere" family of the Manor House. The village is fairly typical for this area of south Northamptonshire containing many traditional stone and thatched cottages. The village's main attraction is its situation on the Grand Union Canal making it a favourite destination for tourists.

The nearby country estate of Stoke Park along Shutlanger Road is occasionally open to the public in August, but all that remains of the main house are the two east and west wings known as Stoke Park Pavilions.

Many public footpaths cross the area around Stoke Bruerne. One such walk, taking in Grafton Regis, was the subject of a Daily Telegraph article.[3] Other walks in and around Northampton are mentioned in the County Council Right of way site.[4]

The village is home to The Waterways Trust's canal museum.

About half a mile north of the village is the south portal of Blisworth tunnel - accessible by a walk along the old towpath (on the eastern side of the canal - north of the village, the western side is either private property or inaccessible.) The tunnel is 3,075 yards long and is the longest wide, freely navigable tunnel in Europe. The tunnel was awarded a Transport Trust 'Red Wheel' in recognition of its industrial heritage and importance on 22-August-2014 (30th anniversary of the reopening of the tunnel in 1984). The Red Wheel is on the blacksmith's forge in Stoke Bruerne.

There are two canalside public houses, The Boat Inn, and The Navigation, both serving a variety of meals and drinks. There is a restaurant/takeaway, The Spice of Bruerne, various bed and breakfast facilities and tearooms. The village attracts many visitors all year round and especially during the summer months. A variety of boat trips may be booked from the canalside. Most of the time there is plenty of activity on the canal with boats going through the locks regularly and plenty going in and out of the tunnel.

The village has a cricket club. Its ground is named after the late George Edward Tarry who donated the field to the village in the late 20th century. The pavilion is dedicated to his wife Elizabeth Fay Tarry, who died in the late 1960s.

Stoke Bruerne had its own railway station, part of the Stratford-upon-Avon and Midland Junction Railway (SMJR)[5] and misnamed Stoke Bruern. This ran close to the village over Blisworth tunnel near the south portal. The station building has been converted to a private house and is along the road to Blisworth just outside the village. The line of the railway, and station platform, are still visible and the Blisworth road has a railway bridge still in position near the former station. The railway ran east to join the West Coast Main Line and then into Bedfordshire.

The village appears, with Blisworth, in the Ealing Studios film Painted Boats (1945), filmed at the end of World War II and[6] directed by Charles Crichton whose notable successes include The Lavender Hill Mob (1951) and A Fish Called Wanda (1988). 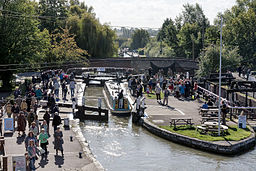