Stanford on Soar is a village and parish in the Rushcliffe wapentake of Nottinghamshire near the River Soar. Stanford on Soar is the most southerly village in the county, although the parish of Willoughby on the Wolds extends further south.

White's Directory of Nottinghamshire, written in 1853, describes Stanford as follows:[1]

Stanford-On-Soar is a small, picturesque village and parish, one and a half miles north of Loughborough, at the point where the River Soar enters Leicestershire. It has about 140 inhabitants and 1,520 acres of land, all belonging to the Rev. Samuel Dashwood, who is both patron and incumbent of the rectory, and resides in the Hall, a modern mansion, which stands on a commanding eminence, and is surrounded by a beautifully wooded park of considerable extent. The tithes were commuted in 1842 for £420, exclusive of 13 acres of ancient glebe.

John Throsby, writing during 1790 in his new edition of Robert Thoroton's Antiquities of Nottinghamshire, describes Stanford as follows:[2]

Which is over the river Soar, and parts Leicestershire from Nottinghamshire, is pleasing: The banks of the river, on the Nottingham side, are adorned with trees, set too regular, if on a plain, to strike the eye of taste; but the line of the eminence being irregular, diversifies the studied formality of the planter, and creates beauty, towards which the stream below, contributes not a little.

The Church, which is beautifully embowered with trees, has 3 bells (see plate page 13, fig. 1.) a nave and two side aisles, neatly pewed. The Chancel is large. 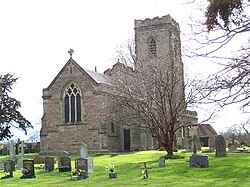 The Church of St John the Baptist is a Grade-I listed church located in the centre of the village.[5] The church began in the 13th century and underwent a significant restoration in 1893. It is within the Anglican Diocese of Southwell and Nottingham and is the most southerly parish in the Province of York.[6] It also forms part of a joint Benefice with the neighbouring parishes of Costock, East Leake, West Leake and Rempstone.

Stanford Hall is a Grade-II* listed country house located in the north of the parish.

As of 2018 it was being developed into The Defence and National Rehabilitation Centre (DNRC).[7] The three year construction process began on 24th August 2015 and is scheduled to be completed in 2018 when it will be handed over to the Ministry of Defence.[8]

In addition to the Church of St John the Baptist (Grade I) and Stanford Hall (Grade II*) there are thirteen other listed structures in Stanford, all Grade-II listed.[5]