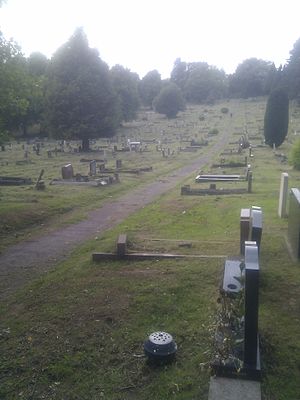 Path within the older part of the cemetery.
St Woolos Cemetery (officially named Newport and St Woolos new Cemetery) is the main cemetery in the city of Newport, Monmouthshire situated one mile to the west of the cathedral known by the same name. It contains four chapels, and various ornate memorials dating back to the early Victorian period, and was the first municipally constructed cemetery in England and Wales.[1] It remains in use to this present day as the main cemetery for burials in Newport, and has been used as a filming location for the BBC series, ‘’Doctor Who’’ as well as ‘’Sherlock’’.

In the first half of the 19th century, the graveyard immediately outside the Cathedral had become full, but burials continued to take place there in the shallow soil covering the existing graves. This became a public health hazard, and "represented a ghoulish aspect with coffins protruding from the ground, many broken open with the grisly contents spilling out."[2] In 1842, a new cemetery was opened near to the cathedral on Clifton Road, however, this too quickly became full, and new arrangements had to be made.

Land was obtained from the Tredegar Estate[1] between Risca Road and Bassaleg Road, and a new cemetery was constructed - the first municipally-constructed cemetery in Britain.[3] The first interment in the new cemetery was that of a sailor named Cooper, and took place on 1 July 1854.[4]

The cathedral graveyard continued to be used for new interments until it was finally closed in 1866, though in latter years these had primarily been the additional interments in existing family plots.[1] Other chapels in the town continued to make use of their own graveyards until 1869, by which time they had all closed. From that point forward, all burials in Newport took place in the new cemetery, until a second public cemetery was opened in Christchurch, Newport in 1883.

The cemetery contains a number of listed buildings, mostly from the Victorian period. Of these, only one remains in use. 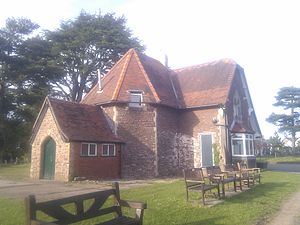 Completed in 1855, the original lodge is constructed of "coursed rubble stonework and ashlar quoins and window surrounds."[5] On the wall to the left of the entrance a blue plaque has been erected in commemorate the artist James Flewitt Mullock, who was also clerk to the Newport and St Woolos Burial Board.

This building has been identified by the Royal Commission on the Ancient and Historical Monuments of Wales (RCAHMW) as being under threat. As a result, it was the subject of emergency recording in 2004,.[6] 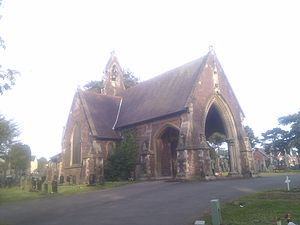 This is a Gothic style building, entered via a columned porch in the western gable. The building is one of a pair of symmetrical chapels facing each other across a circular plot near the main Bassaleg Road entrance to the cemetery. . The Anglican Chapel is the easterly building of this pairing, with the Non-conformist chapel at the west. The Anglican chapel has a neo-gothic lancet arch, decorated with crocketting. The shape of the archway is mirrored by the hood mould above the door within, which features carved head stops. On the gable above the archway is a niche to accommodate a statue, but this has not been populated. The building has no tower or spire, however, does have a bell-gable where the roof line changes between the nave and the chancel. As of 25 May 2011, the single bell remains extant.

This building was in use as a chapel up until 1997,[7] although as of 2011 it appears to be unused, with the inside of the porch being home to pigeons, and the porch floor littered with bird related debris.

A Romanesque style building, forming the westerly building in the symmetrical pair of chapels at the main entrance on Bassaleg Road. While the two chapels are symmetrical in their positioning and dimensions, there are significant stylistic differences between the two. Firstly, the Non-conformist chapel features a distinctive circular tower with a conical, slate roof over the chancel, as opposed to the simple bell-gable of the Anglican chapel. Secondly, the porch features a Norman style, rounded arch, with dog's tooth decoration, as opposed to the gothic arch of the Anglican chapel. Thirdly, where the Anglican chapel has a niche in the gable above the arch to accommodate a statue, the Non-conformist chapel features a small, single light, Norman-arched window into the roof space above the porch. The Non-conformist chapel also features a decorative pattern on the roof using tiles of different shapes and materials.

As with the Anglican Chapel, RCAMH recorded the building still being used as a chapel in 1997,[8] however, as of 2011, the chapel appears to be disused, in a similar condition to the Anglican chapel. 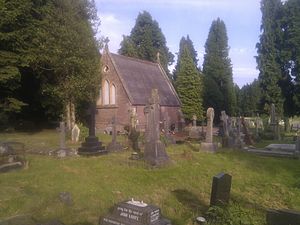 This building stands alone within the cemetery grounds, due south from the Risca Road/Fields Park Road roundabout, and unlike the other chapels, the windows of this chapel have now been bricked up. RCAMH recorded this building as being 'disused' in 1997.[9]

The Synagogue and Jewish cemetery are situated outside and to the North of the main cemetery, within Coed-Melyn Park. The entrance to the synagogue is on Risca Road, to the east of the Fields Park Road roundabout. This small octagonal building is a modern extension to an older Jewish chapel of Rest.,[10] which opened in 1871.[11] The building's small stained glass windows contain a Star of David motif. The burial ground is situated at the rear of the synagogue, containing large gravestones with Hebrew inscriptions. As of 2011, the burial ground has been padlocked, and the gravestones and enclosing walls show evidence of vandalism. In 2013, the Sifrei Torah from this congregation was handed over to an Israeli Jewish community in this building to secure their usage.[12]

There is also a more recent Jewish burial ground within the cemetery itself, with a small, red-brick chapel of rest. The burial ground is also locked, being surrounded by a tall fence. Unlike the older synagogue and burial ground, this structure is not listed. 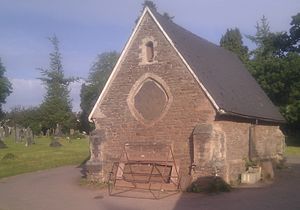 The Mortuary Chapel, situated near to the mortuary on the thoroughfare between the Basslag Road and Risca Road entrances, is also grade II listed.[13] Unlike the other chapels in the cemetery, this chapel was entered through a door at the side of the nave, rather than the gable end. The building has rose windows on each gable-end, which would have provided light into the chapel, but are now boarded up. This chapel is no longer used for its original purpose, and the fabric of the building is showing significant signs of decay.

The gates, piers and flanking walls at the main entrance to the cemetery from Bassaleg Road are also listed.[13] This entrance provides vehicular access to the cemetery.

In addition to the buildings within the cemetery, there are a number of notable memorials within the site.

The cemetery contains a coarse finished, granite obelisk in memory of the victims of the Newport Docks disaster.[14] On 2 July 1909, 39 men were killed when the retaining wall in the excavation which would become an extension to the Alexandra Dock collapsed, trapping the men in mud, water and debris.

At the foot of the memorial are three brass plaques. The first contains a list of the names of the men killed in the disaster. Some of the men were known solely by their surname, as recorded in the pay book, as they were migrant workers employed temporarily on the docks site. The second plaque contains a poem the then editor of the ‘’South Wales Argus’’, W J Collins, entitled Soldiers of Industry. The final plaque records the purpose of the memorial, to commemorate "the 39 men who lost their lives in the Trench Disaster at the New Dock Works". The memorial was erected by the contractors responsible for undertaking the work, Easton Gibb & Son.

In the midpoint between the symmetrical chapels at the main entrance, a war memorial commemorating local men who died in World War I (then known as 'the Great War') has been erected. It commemorates the 197 soldiers and sailor buried between this cemetery and the Christchurch cemetery, also in Newport.

St Woolos Cemetery contains the war graves of 167 Commonwealth service personnel of World War I and 98 of World War II, besides 10 foreign national service graves for which the Commonwealth War Graves Commission are responsible.[15]

The Cemetery in popular culture

The cemetery was used as a filming location for the 2007 Doctor Who episode ‘’Blink’’ and the 2008 Christmas Special,[16] both starring David Tennant. The cemetery features as a location in the crime thriller novel "We Go Down Slowly Rising" by Newport author John Gimblett.