Bassaleg is an ancient parish and semi-urban suburb on the west side of Newport, Monmouthshire. It is located two miles north-west of Newport city centre. Whereas the parish is more extensive, what is regarded as Bassaleg proper is roughly bounded by Forge Road to the east, the railway spur to Lower Machen (the former Brecon and Merthyr Railway) to the north, the St Mellons Road to the south and Rhiwderin to the east. The Ebbw River runs through the area. The A468 road passes through towards Caerphilly and junction 28 of the M4 motorway is less than a mile to the south. 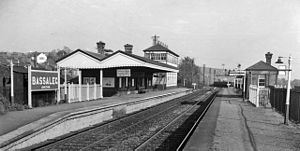 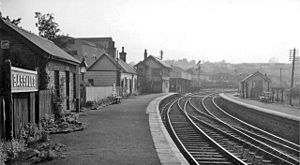 As Bassaleg lies near the junction of the Brecon and Merthyr Railway and Great Western Railway it used to have two stations (Bassaleg and Bassaleg Junction), although they were both victims of the Beeching Axe in the 1960s. A station at Pye Corner on the former GWR line opened in 2014.

Bassaleg's earliest known inhabitant is Saint Gwladys, a hermit and wife of St Gwynllyw or Woolos, to whom Newport Cathedral is dedicated. She founded her own hermitage at Pencarnu, supposedly at Ebbw Bridge.[1] While there she bathed in the Ebbw River and the Lady's Well at Tredegar House may have been dedicated to her. It has been suggested that site of the church in Bassaleg was originally dedicated to her. According to historians, Bassaleg is the only British place whose name derives from the word basilica, a term used in early Christianity for a church containing the body of a saint. Until the mid-19th century, a grave chapel for St Gwladys survived close to the church.[2]

The most important local influence in the parish was that of the the Morgans, Lords Tredegar, at Tredegar House in the township of Duffryn, many of whom are buried in the churchyard.

During the Newport Rising of 1839 the Chartist marchers passed through this area heading into Newport.

Bassaleg contains several public houses, including The Tredegar Arms, The Ruperra, and The Friendly Fox. The Junction 28 restaurant is also situated in Bassaleg.