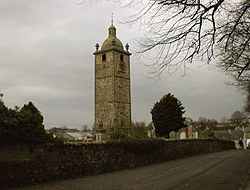 St Ninians is a village and parish in Stirlingshire situated to the south of the county town, Stirling. The village after which the parish is named is now a suburb of the Stirling, located approximately one mile south of the city centre. It was originally known as Eccles (i.e. 'church'), and may have been a Christian site from an unusually early date (possibly 5th or 6th century). Later called St. Ringan's (a variant of St Ninian's). This church was the administrative centre for churches across the strath of the River Forth. Its parish extends from the Forth to the border with Perthshire and includes the villages of Bannockburn, Cowie, Fallin, Plean and Throsk.

In the aftermath of the 1745 Jacobite Rising, the retreating army of Bonnie Prince Charlie blew up the church of St Ninians where they had been storing munitions; only the tower survived and can be seen to this day.[1]

A few years after the Church was rebuilt it became the scene of another drama. The local landowner 'presented' a new minister, Mr Thomson of Gargunnock. He was not chosen by the heads of families and a dispute arose. After years of wrangling the Presbytery was forced to appoint him. The Moderator of Presbytery addressed these words to him

"Sir, we are met here this day, by a former appointment of Presbytery, in obedience to the same sentence of the General Assembly, to admit you minister of St Ninians- a sentence pronounced by the highest horn of ecclesiastical authority or power. That Assembly have assumed to themselves higher power than the Parliament-by some profanely styled omnipotent-that wise, that august body, never enacting any laws without consent of the people. There has been a formidable opposition made against you by six hundred heads of families, sixty heritors, and all the elders of the parish, I believe, except one. This opposition has continued for seven years by your own obstinacy, and if you should this day be admitted, you can have no pastoral relation to the souls of the parish; you will never be regarded as the shepherd to go before the sheep-they know you not, and they will never follow you; and, let me assure you, dear sir, if you persist in your obstinacy, you will do more harm in this parish than you could have done good in Gargunnock though you had been to live there for a hundred years; and you will draw misery and contempt upon yourself-you will be despised-you will be hated-you will be insulted and maltreated. One of the most eloquent and learned ministers of this Church told me lately that he would go twenty miles to see you deposed; and I do assure you, sir, that I, and twenty thousand more friends to our Church, would do the same. You maintained a good character and reputation till your unhappy And obstinate adherence to this presentation. Now, bending under the weight of years and infirmities of old age, what happiness can you propose to yourself in this mad, this desperate attempt of yours, without the concurrence of the people, and without the least prospect of usefulness in the parish. Your admission into it, therefore, can only be regarded as a sinecure, and you yourself as Stipend-Lifter of St Ninians. Now, sir, I conjure you, by the mercies of God, give up this presentation. I conjure you, for the sake of the great number of souls in St Ninians, and by that peace of mind which you would wish in a dying hour, and that awful and impartial account which in a little you must give to God of your own soul, and of the souls of this parish, at the tribunal of our Lord Jesus Christ, give it up."

He did not give up and so was inducted.

Of the twenty-one elders of the parish, one remained loyal to the old Church, the others left its walls. They along with the majority of the people formed a 'Relief Church.'

In the disruption of 1843 a Free Church was formed. This congregation eventually returned to the Church of Scotland and became known as St George's. In 1969 it was dissolved and the building eventually demolished to make way for housing. The Relief congregation originally at the 'toll' continues today as St Ninians [2] United Free Church of Scotland.

In recent years, the old steepl], which was built in 1734 but houses a 17th-century bell, became structurally unsafe but has been restored, with funding from St Ninians Old Parish Church, local community donations, and Historic Scotland. As it stands, this tower appears to be a late 17th- to early 18th-century structure, but is likely to be of much earlier origin (possibly 11th-12th century).

During the 19th century, St. Ninians' main industry was nail-making, with the main works located at the corner of Weaver Row and Main Street (known locally as Nailworks Corner). This site is now the location of a supermarket.

The area is served by a strip of shops and take-aways and other amenities next to the busy Borestone Roundabout, known locally as "the toll". Housing in the area is predominantly council or ex-council, with a mixture of terraced houses and flats.