One of the last of a large number of forts and fortified gun batteries which the army built in Bermuda, primarily during the course of the 19th Century (and many others had been built by the colonial militia during the preceding centuries). They were installed to protect Bermuda, and its Royal Naval Dockyard, the battery was completed in 1910.[1]

Whereas the batteries and forts built prior to this, all of which housed coastal artillery, were originally designed to be equipped with cannon, or rifled muzzle-loading guns (although some were later redesigned to house RBL guns), St. David's Battery was the first designed specifically for rifled breech loaders.[2]

The battery is equipped with two 9.2 inch Mk. X]] and two BL 6 inch Mk VII guns]], on Central Pivot Mk II mount, all with 360 degrees of traverse, and all built by Vickers. The battery is sited on top of Great Head (the larger of the two headlands that together make up St David's Head), at the east end of the island, St David's itself being at the east end of Bermuda.

The position of the battery is dictated by Bermuda's geography. Bermuda is encompassed just within the southern perimeter of a circular barrier reef, which parallels the South Shore at a distance of less than a quarter of a mile, while to the north, it extends up to 18 miles from shore. There are no usable harbours on the South Shore, but large sheltered ones accessible from the lagoon within the reef to the north. This lagoon, however, can only be accessed by large vessels by a channel through the reefs which brings them near to the eastern coast of St David's Island. Passing St David's, vessels can either enter into St George's Harbour, or continue northward, rounding the east end of St George's Island, following through another channel that leads to the west, into the waters of the lagoon, from where they can reach the Great Sound, Hamilton Harbour, the Royal Naval Dockyard, and Murray's Anchorage.

After the independence of the Thirtee Colonies, the Royal Navy built up a large naval base in Bermuda, including the dockyard, an Admiralty House, and various subsidiary facilities. This became the headquarters of the North America and West Indies Squadron, and the primary Royal Naval base in the Western Atlantic (although a base in Brazil served South Atlantic waters).[3] Protecting this base was the primary reason for the British Army's large garrison in Bermuda, with its numerous forts and batteries. Of all of these, St. David's Head occupied the most decisive position, watching over the bottle-neck through which any invading force would have to sail. 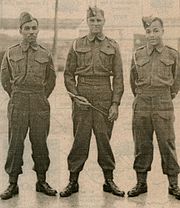 During both World Wars, St David's Battery was designated as the "examination battery" for Bermuda. An officer of the Royal Navy Examination Service was taken out to meet ships arriving off Bermuda, along with the pilot who would steer the vessel through the reef. The ships were stopped under the watchful eyes of the gunners at St David's Head. In that position, the naval officer had the task of examining the vessel and its documents before it was allowed to proceed inwards to the lagoon, or any of the harbours.[3]

The battery fired its first shot during the Great War, but not at an enemy. The British competitor for the 1914 America's Cup, Shamrock IV, was crossing the Atlantic with the steam yacht Erin, destined for Bermuda, when Britain declared war on Germany on 5 August 1914. Harold Stirling Vanderbilt, the Commodore of the New York Yacht Club, sent his own yacht, named Vagrant, from Rhode Island to Bermuda to meet them and escort them to the United States. The British crews had received word of the declaration of war by radio, but not the Vagrant as she carried no radio, and she arrived to find all buoys and navigational aids removed, which had been done at once as a wartime measure: Vagrant arrived on 8 August and attempted to pick their own way in through the Narrows, the channel that threads through the barrier reef, which took them directly to the fore of St David's Battery, where the gunners were on a war footing and opened fire. This was just a warning shot, which had the desired effect. Shamrock IV and Erin arrived the next day. The America's Cup was cancelled for that year. The Shamrock IV and Erin proceeded to New York, where the racer was laid up until 1920. The Erin returned to Britain. Most of the crew were members of the Royal Navy Reserve, who had been called up for full-time service.

Initially, the battery was manned by full-time gunners of the Royal Garrison Artillery, supported by a part-time reserve, the Bermuda Militia Artillery. Following the First World War, the regular gunners were steadily reduced, until the BMA took over complete responsibility for maintaining and operating the colony's coastal artillery (although search lights at the battery, used for night-time firing, were operated by the Bermuda Volunteer Engineers).[4][5]

In 1936, on the occasion of the death of King George V]], the St David's Battery was involved in what could have been a severe international incident. The Bermuda Militia Artilley had been instructed to fire a memorial salute from one of the two 4.7 inch guns at St David's Battery. This salute was to consist of seventy blank rounds, one for each year of the King's life, fired at one-minute intervals. Because of the difficulty of storing ammunition in Bermuda's humid climate, there proved to be only twenty-three rounds of blank ammunition in stock, and the remainder used were all headed ammunition. As the firing was to commence at 8am (on 21 January), and it was thought unlikely any vessels would be in the danger area, it was decided to proceed with the salute, ensuring the guns were elevated for maximum range (8,000 yards), out to sea. The firing began at 08:00, and was over seventy minutes later. However the Militia gunners were unaware that the Colombian Navy destroyer Antioquia, was at the receiving end of their barrage. The Colombian destroyer was British-built and under the command of a retired Royal Naval officer (part of the British Naval Mission to Colombia), and was arriving at Bermuda to undergo repairs at the HM Dockyard. Although the ship's crew members were alarmed to find themselves on the receiving end of an artillery barrage, the ship fortunately was not hit.

The guns were emplaced so that they were difficult, at any great distance, to discern from the slope which fell gently to the top of the cliffs before them. Other than the guns, the only other parts of the battery in direct sight from enemy vessels were two small buildings perched on the edge of the cliff as it lowers towards the water on the northern side of the 6 inch battery (these being the Search Light Emplacement and the Search Light Direction Building), although these would have been difficult to spy (at least, as long as the search light was not operating). On the southern side, and a short distance to the rear, of the No. 1 9.2 inch gun is a raised concrete platform for a Depression Range Finder. Beneath the guns were extensive magazines, which fed ammunition up to the firing parties by conveyor belt-like lifts. The magazines below the 6 inch guns were placed completely below ground, as a slope (surfaced to form a water catchment) rises to the back of the gun positions. The magazines of the 9 inch guns, however, opened to a courtyard to the rear. A short distance behind the battery was a barracks and a small parade ground. Behind these, on Skinner's Hill, was the Fire Commanders Post, which gave orders for gun-laying, the Position Finder Cell and Marine Signals.

In 1953, the last Imperial Defence Plan was issued, under which the local units were tasked. The decision had been taken in 1951 to close the dockyard, other than a small supply base (HMS Malabar); a process which stretched from 1951 to 1958. As a result, the last regular soldiers (a company of the Duke of Cornwall's Light Infantry) were to be withdrawn in 1957, and the last coastal artillery, the two 6 inch guns of St. David's Battery, removed from use immediately. The BMA retasked as an infantry unit, although it remained nominally part of the Royal Artillery.

Today, St David's Battery is intact, but derelict. The two 9.2 inch and the two 6 inch guns remain emplaced, but have been allowed to suffer considerable corrosion damage. The two 6 inch guns, which had originally been emplaced without any kind of gun shield, had been retrofitted later with box-shaped armour shields, providing protection from the front, the sides, and above. Intact in the early 1990s, these barbettes had subsequently suffered such damage that they were removed. The area is currently public parkland (Great Head Park), and the Park Service has made some repairs, and painted the guns to protect them from further corrosion. The breech blocks of the two 9.2 inch guns have been replaced with newly manufactured ones. The barracks and other buildings to the rear of the battery are currently used by a kindergarten school and for private accommodation. A number of apartment buildings have been built around them, and on the hillside dropping down to the North of the battery. Although the magazines are locked, the guns of the battery can be visited by the general public without restriction or cost.