Looking from Garbh Eilean to Eilean an Taighe on the right with Eilean Mhuire in the distance. - This photograph is taken using a 'fisheye' or ultra-wide-angle lens and is not representative of what an observer would see on the ground

The Shiant Isles are a privately owned island group in the Minch, five miles south-east of Lewis in Ross-shire.[1] They form part of the parish of Lochs.

The name "Shiant" (pronounced "Shant") is from the Gaelic Na h-Eileanan Seunta, which means the "charmed", "holy" or "enchanted isles". The group is also known as Na h-Eileanan Mòra, "the big isles". The main islands are Garbh Eilean (rough island) and Eilean an Taighe (house island), which are joined by a narrow isthmus, and Eilean Mhuire (island of the Virgin Mary) to the east. Eilean an Taighe was called Eilean na Cille (island of the church) prior to the 19th century.[2][3][Note 1]

A 17th-century chart by John Adair calls Garbh Eilean Nunaltins Isle, Eilean Mhuire St Marys Isle and Eilean an Taighe St Columbs Isle This last suggests that the chapel on E. an Taighe might have been dedicated to St Columba.(John N. Moore, 'John Adair's Contribution to the Charting of the Scottish Coasts: A Re-Assessment', Imago Mundi, Vol. 52 (2000), pp. 43–65)

The Shiant Isles lie east of the Sound of Shiant. Garbh Eilean and Eilean an Taighe together extend to 353 acres[2] and the much more fertile Eilean Mhuire to 185 acres.[5] In addition to these main islands the line of Galtachan rocks that lie to the west include Galta Beag, Bodach, Stacan Laidir, Galta Mòr, Sgeir Mhic a' Ghobha and Damhag.[6]

In geological terms, these islands essentially represent an extension of the Trotternish peninsula of Skye. The rocks are volcanic, and at 60Ma, very young by Hebridean standards. Dolerite columns on the north side of Garbh Eilean are over 400 feet tall and about 6 foot 6 inches in diameter.in diameter. Similar to those at Staffa and the Giant's Causeway and much higher in places, they were formed by the slow cooling of volcanic rocks deep underground.[2][7] Intrusive sills show a progression in their chemical compositions, from olivine-rich rocks at the base to rocks with very little or no olivine at the top.

The sills are thought to have formed by crystal settling. Recent study has suggested that at least one of the sills represents a multiple intrusion.[8] In some places the basalt is overlain by Jurassic mudstone, which weathers to form much more fertile soil than elsewhere in the Western Isles.

The islands can be visited via various cruises from other Hebridean Islands and from the mainland. 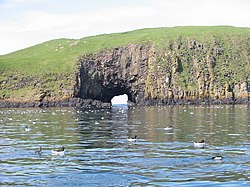 Sea cave of Toll a' Roimh on Garbh Eilean

ane ile callit Ellan Senta, that is in English a Saw, ane ile mair than twa myle lang, verey profitable for corne, store, and fishing, perteining to M’Cloyd of the Lewis. On the eist side of this ile ther is a bore, maid like a vylt, mair nore an arrow shot of any man under the eirde, through the quilk vylt we use to row ore saill with our bottis, for fear of the horrible breake of the seas that is on the outwar side thereof, bot na grate ships can saill ther.[9][10][Note 2] 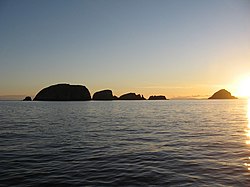 A century and a half later Martin Martin stated that

the two southern islands are separated only by spring-tides, and are two miles in circumference. Island-More hath a chapel in it dedicated to the Virgin Mary, and is fruitful in corn and grass; the island joining to it on the west is only for pasturage.[12][Note 3]

At the beginning of the twentieth century, the Shiant Isles had a population of eight.[1] The author and politician Compton MacKenzie owned the islands from 1925 until 1937. He was an island lover who, at different points in his life rented Herm in the Channel Islands. He never lived on the Shiants, but paid several brief visits during his time as owner.[1]

In 1937 the islands were acquired by Nigel Nicolson, then an undergraduate at Oxford, from monies left to him by his grandmother. Like MacKenzie, Nicolson was later a writer, publisher and politician. Nicolson's son, the writer Adam Nicolson, published the definitive book on the islands, Sea Room (2001). The Shiants now belong to Adam's son Tom Nicolson. Some of the sheep that have grazed the islands since the early 19th century were removed in the summer of 2016. The simple bothy restored by Nigel Nicolson on Eilean an Taighe is the only habitable structure on the islands.[14] A visit to the islands is described in The Old Ways by Robert Macfarlane.[15] 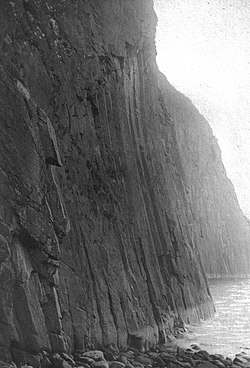 White-tailed eagle eyrie on the Shiant Islands in 1888.

The Shiant Isles have a large population of seabirds, including tens of thousands of Atlantic puffins breeding in burrows on the slopes of Garbh Eilean, as well as significant numbers of common guillemots, razorbills, northern fulmars, black-legged kittiwakes, common shags, gulls and great skuas. Although the remote island of St Kilda has more puffins, the sheer density on the Shiants is greater.[7][16]

The islands were also home to a population of black rats, Rattus rattus, which are speculated to have originally come ashore from a shipwreck.[17] Apart from one or two small islands in the Firth of Forth, the Shiants were the only place in the UK where the black rat (or ship's rat) could still be found.[18] There was thought to be a winter population about 3,500 rats on the islands, with numbers rising exponentially during the summer. Analysis of their stomach contents had shown that the Shiant rats did eat seabirds, but it was impossible to tell if they preyed on live birds or simply scavenged dead remains.[19] Their numbers had for many years been controlled in and around the house.[20]

Over the winter of 2015/16, a far larger rat eradication was carried out, led by Wildlife Management International Limited as part of the Shiant Isles Seabird Recovery Project. The four-year project, funded by contributions from the EU, SNH, the RSPB itself and many individual donors, was initiated to eradicate the rats from all the Shiant islands permanently.[21][22][23]. In March 2018, the Shiant Isles satisfied the internationally-agreed two year eradication period, and were officially declared rat-free.[24]