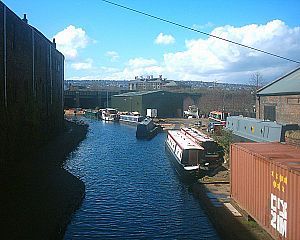 The Sheffield Canal is a canal in the West Riding of Yorkshire. It runs some four miles from Tinsley, where it leaves the River Don, to the Sheffield Canal Basin (now Victoria Quays) in Sheffield, passing through 11 locks.

Sheffield is on the River Don, but the upper reaches of the river were not navigable. In mediæval times, the goods from Sheffield had to be transported overland to the nearest inland port - Bawtry on the River Idle. Later, the lower reaches of the Don were made navigable, but boats could still not reach Sheffield. Proposals to link Sheffield to the navigable Don at Tinsley (and so to the Rivers Ouse and Trent, and to the Humber and the North Sea) were made as early as 1697, but these came to nothing.

In 1815, the Sheffield Canal Company was formed by Act of Parliament in order to construct a canal.[1]

The surveyors' recommended route was to leave the River Don at Jordan's Lock, opposite where the "Holmes Cut" of the Don Navigation joins the river and follow the north side of the Don Valley to a basin "in or near Savile Street". When this was put forward the Duke of Norfolk's estate noted that it would preclude coal from their collieries at Tinsley Park and Manor reaching the canal and as the Duke was the largest financial backer of the project an alternative should be sought more favourable to their cause.

The alternative route was on the south side of the Don Valley, to terminate at a basin on the site of the former orchards of Sheffield Castle. This would require two series of locks, one, at Tinsley to raise the level from the river and a second, at Carbrook, to gain the necessary height for a level flow into the city centre. It was suggested that a short branch, known as "The Greenland Arm" should be built to afford access to Tinsley Park Collieries. Although the longer and more expensive option, the Duke's support meant that this route was the one for which parliamentary approval was sought.

The Act of Parliament was passed on 7 June 1815 with 182 subscribers, the Duke of Norfolk (2,000) and the Earl Fitzwilliam (1,000) being the largest contributors. The civil engineer William Chapman had prepared the plans, and he became the Engineer for the project, which would cost £76,000.[2] The foundation stone of the canal basin was laid by Hugh Parker of Woodthorpe Hall on 16 June 1816 and all was ready for opening less than three years later.

When it opened on 22 February 1819[1] a general holiday was called and crowds of spectators, reportedly 60,000, gathered to watch the first boats, a flotilla of 10 arrive from Tinsley. Within the flotilla was one barge of coal brought from Handsworth Colliery - the first cargo to travel the canal.

By 1840 the city could boast a service second to none, services to Greasbrough ran in connection with the twice weekly "fly-boat", which itself ran in connection with the Hull and London steamers. Richard Preston & Company offered a "fly-boat" service to Thorne for onward transshipment, whilst the London and Sheffield Union Company offered a service "without transshipment" to the capital. Other services ran to Gainsborough (fortnightly) and Leeds (every three weeks). Only five years on and the first major change came about when William Cobby offered water transport from London to Hull and Selby with onward forwarding to Sheffield by rail.

In 1846 there was a move by the long titled Sheffield, Rotherham, Barnsley, Wakefield, Hull and Goole Railway to acquire the Sheffield Canal Company and provide itself with a city terminus. Before this deal could be completed the Sheffield and Lincolnshire Junction Railway came in with an offer which was accepted. The S.& L.J.R. became part of the Manchester, Sheffield and Lincolnshire Railway and on 22 July 1848 they became the owners of the canal. The canal was transferred to the River Dun Navigation Company by an Act of 28 July 1849 where it was joined by the Stainforth and Keadby Canal and the Dearne and Dove Canal. After fusion with the South Yorkshire, Doncaster and Goole Railway it became the South Yorkshire Railway and River Dun Navigation Company. The South Yorkshire Railway passed to the M.S.& L.R. and they again became the canal's owners.

In 1895 the Sheffield Canal was amalgamated with the River Don Navigation and the Stainforth & Keadby canal to form the Sheffield and South Yorkshire Navigation. The following year the facilities at Sheffield were modernised and a new warehouse built straddling the basin.

The Government took control of the canals during the First World War and no maintenance was undertaken. After the war, in October 1918, the City Council and local business met and decided to press the Government to nationalise the canals and pay the costs of repairs. In principle they would be willing to contribute to "Free the canal of railway interference". In 1920 the Transport Committee of the City Council received several plans for the canal. Within the city these included the construction at Tinsley, adjacent to Tinsley station, of a new basin to serve the eastern side of Sheffield and to retain and improve the canal basin to serve the more general and lighter trades of the city centre. The City Council was unwilling to go ahead with these works without Government backing which was not forthcoming, however in 1925 a new grain silo was erected alongside the canal by, and for the use of Samuel Smith (Sheffield) Limited, based on Carlisle Street. Before this they had received the grain in sacks which were transferred by horse dray from the canal basin, the weight being such that an extra horse was added to haul the dray up Spital Hill to reach Carlisle Street.

In December 1940, lock 6 of the Tinsley flight was hit by a bomb dropped as part of the Second World War bombing campaign against British cities, and suffered considerable damage.[3] A plaque nearby records the efforts of the workers who reconstructed the lock in difficult circumstances.

The canals, including the Sheffield Canal, were nationalised in 1948 but traffic, although many efforts were made, showed little increase and that only temporary. In 1960 the British Waterways Board informed the City Council that they intended to make Thrybergh the new waterhead, the site being alongside the proposed new British Steel Corporation's bar mill. In 1961 the BWB opened their new warehouse at Rotherham, almost opposite the confluence of the River Rother with the Don, and this became the waterhead.

The end in sight

In early July 1980 the Sheffield Canal received its first commercial cargo in 10 years but this was not a beginning, more a finale. Plans were put forward in the early 1980s by both the Sheffield City Council and British Waterways. The decision from the Environment Minister was eagerly awaited and it was not until the 1990s that the canal basin was restored and renamed Victoria Quays.

There were originally twelve locks in the Tinsley flight, which rises 70 ft[2] but in order to accommodate a new railway bridge, locks 7 and 8 were combined in 1959, with a single concrete chamber replacing both of them.[3] The modern numbering scheme has locks 1 to 6, 7/8 and 9 to 12. Water for the top pound, and hence the locks, is pumped from a small building situated below Tinsley Viaduct. This originally housed a steam engine to drive the pumps, but this was replaced by a duty and standby 125 hp diesel engine in 1918. The pumps supply 3,500 gallons per minute (265 l/s) to an outlet near the top lock of the flight.[3]

The Sheffield Canal featured in the opening scene of the 1997 film The Full Monty.[1] This clip was part of a Sheffield City Council publicity film entitled "Sheffield, City on the Move" made some 30 years before.