Sandal Magna or Sandal is a village in the West Riding of Yorkshire which has become a southern suburb of Wakefield. Sandal Magna had a recorded population of 5,432 in 2001.

The name 'Sandal' derives from the Old Norse sandr meaning sand or gravel and healh, a meadow.[1]

Sandal Castle is here and a parish church that predates the Domesday Book. From much earlier times though there is archaeological evidence of ancient settlement.

The village is two miles south of Wakefield and eight miles north of Barnsley, and thirty miles from the county town, York. It belongs to the Agbrigg and Morley Wapentake, and was long in the Liberty of Wakefield. Sandal sits on the south side of the River Calder on the road from Wakefield to Barnsley and its parish covers 1,700 acres.[2] The main road through Sandal is the A61 Wakefield to Barnsley road.

The Battle of Wakefield was fought here in the 15th century during the Wars of the Roses.[3]

In the Domesday Book of 1086 Sandal is recorded as a berewic (a village where barley was grown) in Wachefeld (Wakefield) where there was a church with a priest. The church was on the site of the present church of St Helen.[4]

William de Warenne, 2nd Earl of Surrey (1081–1138) was granted the Sandal estates in 1107 and began the building of Sandal Castle which became the baronial seat of the lords of the manor of Wakefield.[5][6]

In 1460, during the Wars of the Roses, Richard Plantagenet, Duke of York was killed on 30 December in the Battle of Wakefield between Sandal Castle and St Helens Church.

There are records of mining for coal and quarrying for stone in the 14th century.[7]

The highwayman, John Nevison was arrested on 6 March 1684 at the Three Houses Inn and tried for the murder of Darcy Fletcher, a constable who had tried to arrest him near Howley Hall at Soothill in Batley.[8] 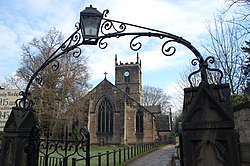 Sandal Magna's church is dedicated to St Helen, otherwise known as the Enmpress Helena, the mother of Constantine the Great.

At the time of the Norman Conquest Sandal Church was a possession of the crown. The Saxon church was recorded as one of two churches in the Wakefield manor in the Domesday Book of 1086. In about 1150 the first church was replaced by a second church in the shape of a Latin cross by Earl Warenne of Sandal Castle. It was enlarged in about 1180 and almost completely rebuilt in the first half of the 14th century. The church was altered and extended after 1505 and the present church extensively restored and enlarged in 1872.[9]