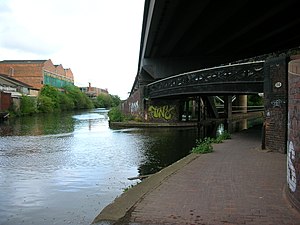 To Fazeley ahead, to Bordesley Junction right 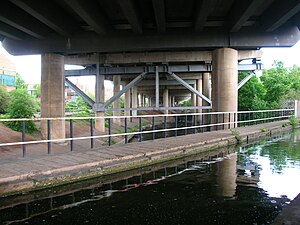 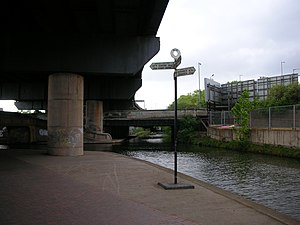 Start of the Tame Valley Canal with its toll island. To Birmingham, left

Salford Junction is the name of the canal junction where the Grand Union Canal and Tame Valley Canal meet the Birmingham and Fazeley Canal in Birmingham 7, Warwickshire.

Salford Junction became a double junction on 14 February 1844 when the Grand Union Canal and Tame Valley Canal joined the Birmingham and Fazeley Canal.[1] Prior to this, the Birmingham and Fazeley Canal crossed the River Tame via a seven-arched aqueduct, each with a span of 18 feet.[2] T & S Element opened boatyards at Salford Bridge in 1932 which soon became the company's head office. Spencer, Abbott and Company owned a boatbuilding yard at the junction too, however traces of these companies no longer exist.[3]

A bridge has been recorded as being at this location since 1536 during the reign of King Henry VIII, however it is believed to have existed since 1290.[4] In the document where it is first mentioned, it is named Shrafford Brugge and described as having four arches of stone.[4] "Shrafford" is a Saxon word meaning "the ford by the caves". The caves were natural, water formed cavities in the face of the nearby Copeley Hill escarpment, which were used as air-raid shelters in World War II and were finally removed upon the construction of Spaghetti Junction. The bridge was to be repaired by the parish of Aston, however, when it was destroyed by Roundhead Parliamentary troops during the Civil War, reparation costs were charged to the county.[4] The bridge was reconstructed in 1810 to convert the footbridge into a road bridge. It was designed by John Couchman (1771–1838), who was paid £3,800 for the work.[5] The bridge was crossed by a road connecting Birmingham to Lichfield.[6] It was destroyed during the construction of Spaghetti Junction.