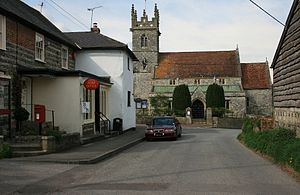 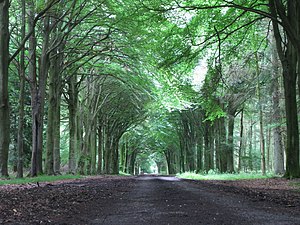 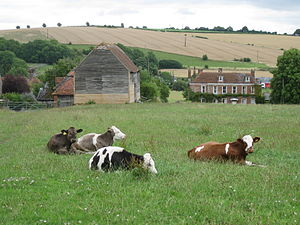 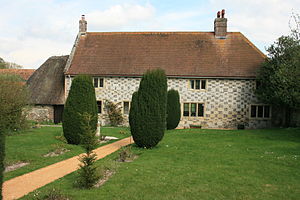 Great Wishford is a village and parish in the Wylye Valley in Wiltshire, three miles north of Wilton and approximately five miles north-west of Salisbury. It is situated at a curve in the River Wylye and has a triangular street layout comprising South Street, West Street and Station Road.

The village pre-dates the Norman conquest of 1066, but was only a hamlet at this time. The name has evolved over the years, with recorded names including Wicheford (meaning a ford where wych-elms grow), Witford, Willesford Magna (mid-16th century) and Wishford Magna (early 17th century). Set into the wall of the church is a series of nine engraved "bread stones" that record the price of bread from 1800 (during the Napoleon blockade) until 2000.

To the west of the village lies the Iron Age settlement and possible hillfort of Ebsbury.

By the Will of Sir Richard Grobham Howe (c. 1651–1730), a school was established at Wishford for teaching reading, writing, accounts, and the Church catechism to twenty poor boys and twenty girls. In 1833 this had an income of £63: 5s and was teaching the forty children plus a varying number of "pay-scholars", for whom a small fee was payable.[2]

It is one of the few villages that still celebrates Oak Apple Day on 29 May each year. On this day, Great Wishford villagers claim their ancient rights to collect wood from Grovely Wood. This tradition is said to date back to 1603, when the charter of rights to collect wood in the Royal Forest of Groveley was confirmed by the Forest Court. The rights themselves date back several centuries before 1603. It is a matter of debate whether this tradition has been kept up continuously since the 17th century, or whether it was revived / re-invented in the late 19th century.

The events of a modern oak apple day include a "band" waking the villagers in the early hours of the morning, gathering oak branches from the woods at dawn, a village breakfast in the local pub (Royal Oak), then onto Salisbury, where there is dancing outside the Cathedral followed by claiming rights inside the cathedral by shouting "Grovely, Grovely, Grovely and all Grovely". (Although the charter requires just three 'Grovely's, tradition demands four - "Three for the charter and one for us", as it's usually expressed.) In the afternoon there is a formal meal, and other events for villagers in Oak Apple Field.

These days, most villagers put more effort into claiming their rights than in exercising them: the handcarts used to transport wood from Grovely seem to have entirely disappeared.

The village has the Royal Oak pub, Great Wishford Church of England Primary School, St Giles church, and a post office which has limited opening hours and no longer performs the function of village store. There is also a cricket pitch and a children's play area (re-modelled in spring 2009) which are shared with the neighbouring village of South Newton.

The Wylye river runs to the east of Great Wishford, and is used for trout fishing. Wilton Fly Fishing Club, which was founded in 1891,[3] is based in the village.

The A36 trunk road runs along the Wylye valley across the river from the village.

Great Wishford had a station on the Salisbury branch line (Great Western Railway) from 1856 until its closure in 1955. Trains now pass through the village between Salisbury and Bristol without stopping. Bungalows have been built where the station platform used to be, and the station master's house is now a private home.

The National Cycle Route 24 and the Monarch's Way long distance footpath pass close to the village.