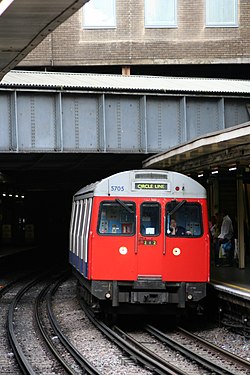 The River Westbourne is a river in Middlesex, which flows from Hampstead down through Hyde Park to Sloane Square in the heart of the West End of London and into the River Thames at Chelsea. It is today an almost wholly subterranean river; buried and culverted while the busy town passes above.

The river was originally called the Kilburn, from Old English either for "royal stream" or "Kine (cows) stream". It has been known, at different times and in different places, as Kelebourne, Kilburn, Bayswater, Bayswater River, Bayswater Rivulet, Serpentine River, The Bourne, Westburn Brook, the Ranelagh River, and the Ranelagh Sewer. It is of similar size to the River Fleet, another underground river.

As the Kilburn, the river gives a name to the town of that name, Kilburn. As the Bayswater it likewise names a town; Baywater, west of the Edgware Road. As the Serpentine River, it gives a name to the ornamental lake in Hyde Park, the Serpentine, which lake is created from what was the course of the river, when it was permitted to flow above ground.

The River Westbourne rises in Hampstead and flows south through Kilburn. It ran west along what is now Kilburn Park Road and then south along what is now Shirland Road. After crossing what is now Bishops Bridge Road, the river continued more or less due south, between what is now Craven Terrace and what is now Gloucester Terrace. At this point, the river was known until the early nineteenth century as the Bayswater rivulet and from that it gave its name to the area now known as Bayswater.

The river enters Hyde Park at what is now the Serpentine, which was formed in 1730 by building a dam across the Westbourne at the instigation of Queen Caroline, wife of King George II, in order to beautify the royal park. The Westbourne ceased to provide the water for the Serpentine in 1834,[2] as the river had become polluted, and the Serpentine is now supplied from water pumped from the Thames.

The Westbourne left Hyde Park (both before and after it had been dammed to form the Serpentine) at Knightsbridge which was originally a bridge over the Westbourne itself. It is recorded that, in the year 1141, the citizens of London met Matilda of England at this bridge.

The river ran from Knightsbridge southwest through Chelsea into the River Thames.

Waters leave the Serpentine by the cascade at the eastern end of that lake, though the Westbourne has been diverted form the lake which stole its couse.

The waters of the Westbourne or Bayswater were originally pure and in 1437 and 1439 conduits were laid to carry water from the Westbourne into the City of London, for drinking. In the nineteenth century, however, the water became filthy and impure by its use, in effect, as a sewer.

When Belgravia, Chelsea and Paddington were developed, it became necessary to drive the river Westbourne underground in order to build over it. The river was therefore directed into pipes in the early part of the nineteenth century, work which was completed in the 1850s. Since then, the Westbourne has been one of the lost rivers of London, running underground in a pipe.

The pipe bearing the river can still be seen running above the platform of Sloane Square tube station. It is located just below the ceiling towards the end of the platforms closest to the exits. The pipe is the original one constructed in the nineteenth century. Although the station was badly bombed during the Battle of Britain in November 1940, the old iron pipe was not damaged.

The river falls into the Thames about 300 yards west of Chelsea Bridge. This outfall, from a pipe now called the Ranelagh Sewer, can still be seen at low tide.

The finest and most intelligible map of the whole course of the Westbourne, superimposed over the Victorian street plan, is found in an article by J. G. Waller published in 1882.[1] The map shows that the River Westbourne never ran as far west as even the easternmost extremity of Westbourne Grove (which ends at Queensway).