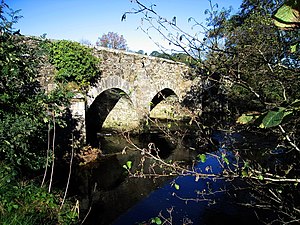 The River Slaney at Stratford-on-Slaney

The River Slaney is a large river in the south-east of Ireland. It rises on Lugnaquilla Mountain in the western Wicklow Mountains and flows west and then south through the counties of Wicklow, Carlow and Wexford for 73 miles,[1] before entering the Irish Sea, in St George's Channel at Wexford.

The river's name is from the Irish language. It is known in Irish as Abhainn na Sláine, meaning "River of health".

The estuary of the Slaney is wide and shallow and is known as Wexford Harbour.

Towns that the Slaney runs through include Stratford-on-Slaney, Baltinglass, Tullow, Bunclody, Enniscorthy and Wexford.

Over the river's 73-mile course, it is crossed by 32 road bridges and one railway bridge.[2]

Varied and plentiful wildlife can be found in the environs of the river. In Wicklow, herds of deer can be seen, as well as swans, dippers, wild ducks, herons and kingfishers. At dusk, bats, owls and otters may be seen, while the mudflats of the estuary are favoured by black-headed gulls, redshanks and oystercatchers.[3] The rare goosander can be seen on the Slaney at Kildavin. In season, salmon and trout and pike are fished.

Ptolemy's Geographia in the 2nd century AD describes a river called Μοδοννος (Modonnos, "mudflats") which may have referred to the River Slaney, though scholarly opinion remains divided on the issue.[4]