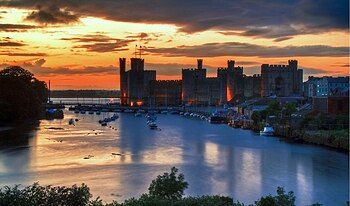 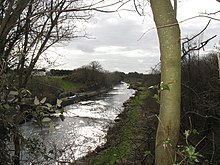 The Seiont in Port Crawia

The River Seiont is a river in Caernarfonshire, which runs from the heart of Snowdonia and down into the Menai Strait at Caernarfon.

The river has different names in different reaches. The headwaters rise on the mountain slopes at Pen-y-pass, at the top of the Llanberis Pass between Snowdon and the Glyderau. The stream, known here as the Afon Nant Peris, then flows down the Pass (all alongside the A4086) north-westwards to Llyn Peris, and to Llyn Padarn near Llanberis.

The river issuing from Llyn Padran is known as the River Rhythallt, and so it continues until the weirs at Llanrug.

Below Llanrug, the river becomes the Seiont, which turns and flows across Arfon west-southwest to Caernarfon. Its mouth is in Caernarfon, the Castle stading at the rivermouth. The mouth forms a natural harbour as it enters the Menai Strait.

The name of the river is ancient: the Roman fort of at Caernarfon was named Segontium, which is based on the Latinised form of the name which has come down to us as the Seiont.