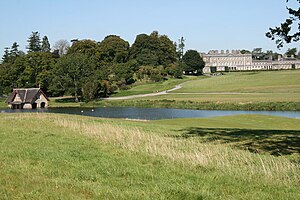 The Rye as a lake below Carton House

The River Rye or Ryewater is a river 19 miles long in Meath and County Kildare. It is a tributary of the River Liffey, which it joins at the border of County Kildare with County Dublin.

The Rye rises in Meath, flowing south-east for 19 miles. Although the river has been drained it is generally fast flowing over a stoney bottom.[1] The Rye's major tributary is the Lyreen.

The Rye (right) meets the Liffey (centre to left), at the Boathouse of Leixlip Castle

The Rye runs north of Kilcock follows the Kildare-Meath border for several miles, enclusively entering Kildare, in the very north of the county, at Maynooth. Running past the town and Maynooth Castle, which is built between the Lyreen and another smaller tributary of the Rye.[2]

The Lyreen and Rye meet to the east of Maynooth and flow on through the estate of Carton House. In the estate, the river was widened to form an ornamental lake within the Georgian parklands, further enhanced by an ornamental bridge and boathouse.

Near Louisa Bridge in Leixlip the waters from the Leixlip Spa flow into Rye River. There is also an overflow from the canal. The Rye then flows under the Royal Canal, which is carried in the Leixlip aqueduct almost 100 feet above. The aqueduct is in fact an earth embankment, which took six years to build in the 1790s.[3]

The Rye then descends into the heart of Leixlip. Here the river was harnessed by mills. In 1758, the site was used as a linen printing mill.[4] Later the Rye Vale distillery was built, producing more than 20,000 gallons of whiskey annually in 1837.[5] The distillery finally closed for good in the 1890s[6] and the distillery has since been converted into apartments.[7]

Below Leixlip the Rye flows under the Rye Bridge to meet the Liffey on the county border near the existing Boat House in Leixlip demesne.[8]

The river has stocks of brown trout and pike. Angling is available at the Lyreen Angling Centre[9], with the Leixlip and District Angling Association[10] and at Carton House.[11]