Bladon is a village and parish on the River Glyme in Oxfordshire. It is situated about 6½ miles north-west of the county town, Oxford and is notable as the burial place of Sir Winston Churchill. The 2011 census recorded the parish's population as 898.[1]

The Church of England parish church of Saint Martin was originally 11th or 12th century, and its south porch had a Norman doorway. However, the old church was demolished in 1802 and a new building completed in its place in 1804. This in turn was completely rebuilt in 1891 to designs by the Gothic Revival architect A.W. Blomfield.[2]

The parish of St Martin's includes Blenheim Palace, the family seat of the Duke of Marlborough. Most members of the Spencer-Churchill family are interred in St. Martin's parish churchyard at Bladon; only the Dukes and Duchesses are buried in the Blenheim Palace chapel. Blenheim Palace is also the birthplace of Winston Churchill, who was Prime Minister of the United Kingdom 1940–45 and again 1951–55. Like his parents, he too was buried in St. Martin's parish churchyard after his death in 1965; his wife Clementine was buried in the same grave after her own death 12 years later.[3] 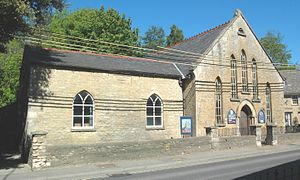 A Methodist congregation was established in Bladon by 1820 and built its first chapel in 1843.[4] In 1877 a new chapel was built copying the Early English style of the 13th century.[2] It is now Bladon Methodist Church[5] and belongs to the Oxford Methodist Circuit.[6]

In 1858 the Duchess of Marlborough, wife of the 7th Duke, provided a new Gothic Revival building[2] to found a school in Bladon.[7] The building was enlarged in 1890.[2] It was known as the Duchess of Marlborough's school, but in 1937 its ownership was transferred from the Duchy of Marlborough to Bladon parochial church council.[7] In 1940 it was reorganised as a junior school, with most senior pupils from Bladon thereafter going to secondary school in Woodstock.[7] Since 1954 the school has been a Church of England primary school.[8] 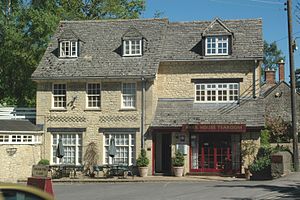 Bladon has one public house, the White House, controlled by Greene King Brewery.