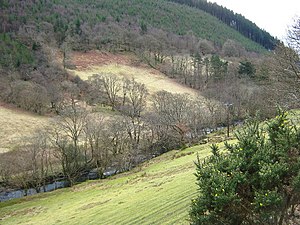 The Dulas near Corris

The River Dulas (also referred to as the North Dulas) is a river forming the border between Merionethshire and Montgomeryshire.

It rises from a source in the hills above Aberllefenni and passes through Corris, Esgairgeiliog and Pantperthog before joining the River Dovey at Ffridd Gate near Machynlleth. Another river also called the Dulas joins the Dovey from the south, upstream of its confluence with the North Dulas.

Roads and Railways in the Dulas valley