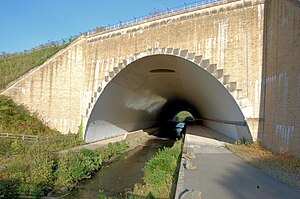 The River Bollin flowng beneath the southern runway of Manchester Airport

The River Bollin is a major tributary of the River Mersey, flowing through Cheshire.

The river rises in Macclesfield Forest at the western end of the Peak District, and can be seen in spring form, from the Buxton to Macclesfield road. The stream then descends the ten mile through Macclesfield and Wilmslow where it meets the River Dean, near Styal Prison. After another ten miles the Bollin joins the River Mersey north of Lymm.

The river flows through the Styal country park and was used in the cotton calico factory there, Quarry Bank Mill, as a source of power. Near to the Quarry Bank Mill site there is a natural weir. The Bollin is culverted underneath the southern runway of Manchester Airport.

The town of Macclesfield used to dispose all its waste and sewage into the Bollin. The profusion of human sewage in the Bollin was still common in 1850.